Arizona Gov. Doug Ducey announced the state’s election isn’t over until all court cases have been settled, as the Trump campaign and state GOP filed lawsuits in Maricopa County in a bid to block officials from certifying the election results due to alleged voter irregularities and improprieties.

“There are legal claims that are being challenged in court and everybody on the ballot has certain access rights and remedies and if they want to push that they are able. Once those are adjudicated and the process plays out, I will accept the results of the election,” the Republican governor said in a news conference on Wednesday. It was the first time he held one since the Nov. 3 election.

“We can trust our elections here in Arizona,” Ducey said, but he stipulated moments later: “There are questions and those questions should be answered.”

Ducey has not called Democratic challenger Joe Biden the winner of the election. The governor noted that he heard about voting issues in the state but hasn’t personally seen any evidence.

Arizona state law gives all Arizona counties until Nov. 23 to certify the results of the election. Then, the counties are to send in their results to the Secretary of State’s office, which then has another 10 days to certify the statewide results.

While several news outlets have described Biden as the president-elect and declared him the winner, The Epoch Times has not pending the outcome of lawsuits and other processes needed to complete the election and finally declare a winner. The Electoral College votes next month, and Congress will hold its Joint Session to formally count electoral votes and declare official election results in early January.

According to unofficial projections, Biden is ahead of Trump by about 11,000 votes in Arizona.

Earlier this week, the Arizona GOP moved to halt county officials in the state to delay certifying their results.

“The party is pushing for not only the county supervisors but everyone responsible for certifying and canvassing the election to make sure that all questions are answered so that voters will have confidence in the results of the election,” said Zach Henry, a spokesman for the Arizona Republican Party, reported The Associated Press.

The party also filed a lawsuit to request a hand-count in Maricopa County, which includes Phoenix, of a sampling of ballots. They also are seeking a court order prohibiting the county from certifying results until that case is decided. 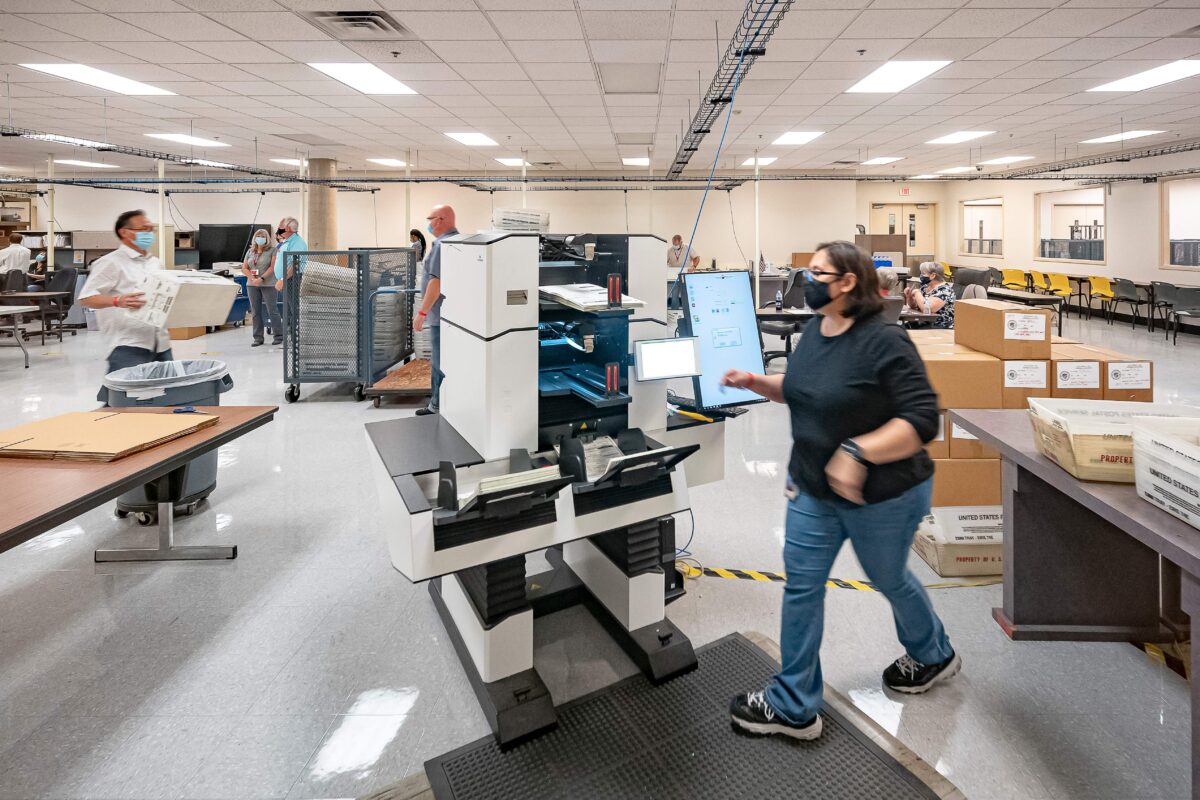 Ballots are counted at the Maricopa County Election Department after the US presidential election in Phoenix, Arizona, on Nov. 5, 2020. (OLIVIER TOURON/AFP via Getty Images)

“This case is about delay—not the adjudication of good faith claims,” lawyers for Democratic Secretary of State Katie Hobbs said in response, AP reported.

Hobbs, a Democrat, also claimed Wednesday she is receiving threats of violence following the election, alleging that Trump and other GOP members are spreading misinformation. Hobbs did not provide evidence for her claims of violence.

“Their words and actions have consequences,” Hobbs said. “Now, I am calling on other leaders in this state, including the governor whose deafening silence has contributed to the growing unrest, to stand up for the truth.”

Ducey said in his news conference that the alleged threats are “completely unacceptable.”

In Michigan, Wayne County Board of Canvassers Chairperson Monica Palmer and board member William Hartmann signed sworn affidavits on Wednesday saying they only voted to certify election results this week because they were told that a full audit of the election would occur. But when they learned of no audit, they rescinded their votes to certify the results.

Both Palmer and Hartmann said they were threatened. The two were berated and accused of racism after they voted against certifying the results, said Palmer, adding that the abuse went so far as to have “threatened me and members of my family.”

Ivan Pentchuoukov contributed to this report.