In an interview with Fox News’ Sean Hannity on Wednesday night, Jordan noted that the two committees aren’t meeting this week.

The two Republicans made note of improprieties in Pennsylvania, referring to allegations about election officials in some counties not allowing poll watchers to observe vote-tabulation efforts. The state’s Supreme Court ruled and overturned a Trump campaign win earlier this week about allowing poll watchers more access to counting efforts. Jordan and Comer also made reference to a variety of irregularities in Georgia, including an instance this week when county officials found 5,000 uncounted ballots, memory cards filled with unscanned ballots, and other tranches of ballots that were not counted.

“Given your role as leaders of a political party that spent four years baselessly calling into question the legitimacy of the 2016 election with debunked allegations of Russian collusion,” they wrote to the chairs, “you owe it to all Americans to fully examine allegations of actual election errors and misconduct.”

The two GOP lawmakers accused Democratic officials in several states of changing mail-in voting deadlines right before Election Day, including the “Democratic majority on the Pennsylvania Supreme Court” when it “unilaterally extended the deadline to receive mail-in and absentee ballots by three days after Election Day.” 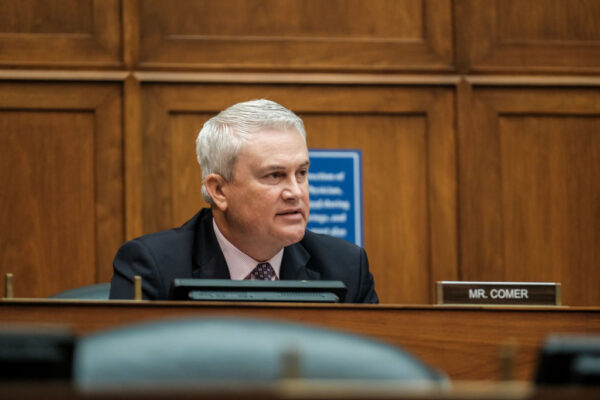 Rep. James Comer (R-Ky.) listens at a hearing before the House Committee on Oversight, Environment Subcommittee in the Rayburn Building in Washington on July 24, 2020. (Michael A. McCoy/Getty Images)

These claims, among others, warrant the “urgent need for congressional oversight” and the two House committees should conduct hearings as soon as possible, Jordan and Comer added.

The call for congressional investigations into the presidential election comes as President Donald Trump’s campaign filed lawsuits in key battleground states, filed a petition for a partial recount in Wisconsin, and is awaiting the results of a recount in Georgia.

While some news outlets have called the race for Democratic candidate Joe Biden, Trump hasn’t conceded. The Epoch Times has not declared the race for either candidate pending the outcome of legal challenges.

In Wisconsin, the president’s campaign announced it would spend $3 million to recount in Milwaukee and Dane counties—both heavily Democratic areas.

“The people of Wisconsin deserve to know whether their election processes worked in a legal and transparent way. Regrettably, the integrity of the election results cannot be trusted without a recount in these two counties and uniform enforcement of Wisconsin absentee ballot requirements. We will not know the true results of the election until only the legal ballots cast are counted,” Jim Troupis, counsel to the Trump campaign, said in a statement on Wednesday.