Police are investigating after an Arizona school board president was accused of compiling a dossier on parents opposed to CRT and other political opponents. Scottsdale Unified School District President Jann-Michael Greenburg allegedly catalogued social security numbers, property records and divorce decrees, among other things.

On Saturday, the Scottsdale Police Department said they were aware of the allegations and announced that an investigation was underway. “We are conducting an investigation into the matter and will report our findings once it is complete,” police said in a brief statement. The allegations came to light after Superintendent Scott Menzel revealed Friday that Greenburg accidentally shared the document via Google Drive.

Greenburg had sent an email to district parent Kim Stafford that included a screenshot and link to a Google Drive file in which he accused her of being anti-Semitic over comments she made about George Soros, according to the Daily Caller. From there, Stafford shared the link with numerous parents, including Amanda Wray, who then told the Daily Caller.

According to Wray, the Google document contained images of her young daughters. “When I first saw the contents of the Google Drive and I saw my 8- and 10-year-old’s photos, that was terrifying. And like, what’s he doing?” Wray told AZFamily.com. “But he has pictures of my vacation home, property records. I’m not a political opponent, I’m an involved parent and that is threatening to me and it makes me wonder why and what he was planning to do with those photos,” she said.

The Google document has since been deleted but was previously available to anyone who had the link. All told, it is believed that Greenburg had compiled information on at least 47 people. Folders included in the drive were labeled “SUSD Wackos,” “Anti Mask Lunatics” and “Press Conference Psychos.” One of these folders  included a video showing parents holding signs reading “CRT is Racist” and “SUSD We Demand Transparency,” the Daily Caller said.

On Wednesday, the district sent parents an email seeking to assure them that their personal data was safe. The district also placed blame for the dossier on Greenburg’s father, Mark. “While the existence of the site and its public record contents may raise concern, such activities are not within the purview of the Scottsdale Unified School District to control and are unrelated to the district’s task of providing future-focused, world-class learning opportunities to our 22,000 Pre-K-12 students,” the district said.

A video obtained by the Daily Independent allegedly showed Mark Greenburg snapping photos of parents and kids without their knowledge on Aug. 24, hours before a school board meeting. Though Mark Greenburg is listed as the author of the document,  Jann-Michael previously admitted to sharing a computer with his dad, according to AZ Free News.

Many are calling for Jann-Michael Greenburg to step down following the revelations. 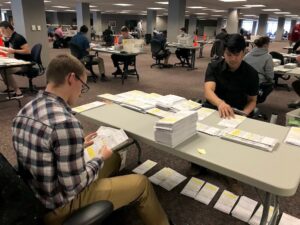 Poll: Roughly 60% of Arizona Voters Are Against Pro-Amnesty Politicians