BREAKING: 13 Dead After Ford SUV with 25 Immigrants, Including Many Children, Pulls In Front of Big Rig on Highway in Southern California

This is so terribly sad.

According to the Daily Mail:

At least 13 people were killed Tuesday morning when an SUV stuffed with 25 suspected undocumented immigrants, including children, collided with a semi-truck in Southern California.

The crash occurred on State Route 115 in the area of El Centro, 10 miles north of the US-Mexico border, at around 6:15am local time, authorities said.

The SUV, a maroon Ford Expedition carrying 25 passengers, had been driving westbound on Norrish Road when it traveled ‘in the direct path’ of a gravel truck heading northbound on 115.

The van was full of what is believed to be undocumented immigrants per the Daily Mail:

The dead include some Mexican citizens, officials said, who ranged in age between 20 and 55. The injured, meanwhile, are aged between 16 and 55.

Earlier Tuesday, chief executive officer of El Centro Regional, Dr. Adolphe Edward, said he believed that all the victims in the SUV were undocumented migrants. The claim is yet to be confirmed by authorities.

KTLA5 in Southern California reported on the crash:

What a travesty this is for all involved.  Expect more of these types of incidents as Biden opens up the borders and encourages undocumented immigrants to sneak into the US. 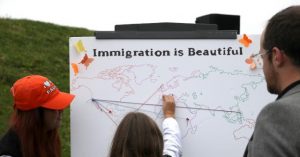 Virginia Shuts Down Elections Site Ahead of Key Republican Deadline