California Bill Amended to Remove Language That Allegedly Would Banned Conservative Christians From Serving As Police. Is it Enough?

A bill introduced last month in the California Assembly, A.B. 655, called the “California Law Enforcement Accountability Reform Act,” which was introduced by Democratic Assemblyman Ash Kalra, would require background checks of prospective law enforcement officers “engaged in membership in a hate group,” participated in “hate group activities, or made public expressions of hate.” Some believed that the language was so broad that the bill, as it was written, could have been used to exclude members of non-hate groups, such as pro-life organizations, or churches that don’t condone same-sex marriage.

“Under the guise of addressing police gangs, the bill at the same time launches an inexplicable, unwarranted, and unprecedented attack on peaceable, conscientious officers who happen to hold conservative political and religious views,” said Matthew McReynolds, a senior staff attorney for the Pacific Justice Institute. “Indeed, this is one of the most undisguised and appalling attempts we have ever seen, in more than 20 years of monitoring such legislation, on the freedom of association and freedom to choose minority viewpoints.”

Earlier this month, Ash Kalra, the author of the bill, told PJ Media that he did not intend his bill to “curtail freedom of religious views or political affiliations — conservative or otherwise,” and acknowledged that the bill’s “definitions are a work in progress.”

Kalra also said police officers should have personal viewpoints that are approved of by the communities they serve. “The role and responsibility of peace officers is so important for a community healing — for a community’s safety — and the people in the community don’t feel that those that are entrusted with that responsibility look at them in a way that’s unbiased. That undermines our entire public safety system.”

Kalra eventually backed down, and those definitions have since been updated. Last week, the bill was amended to exclude language that included in its definition of a “hate group” as an organization that has expressed “support for the denial of constitutional rights” of “any group of persons based upon race, ethnicity, nationality, religion, gender, gender identity, sexual orientation, or disability,” which could have been interpreted as meaning that anyone who opposes abortion or same-sex marriage, which have been deemed constitutional by the Supreme Court.

The bill now defines a “hate group” as “an organization that, based upon its official statements, principles, or activities, supports, advocates for, threatens, or practices the genocide of, or violence towards” the aforementioned group of persons.

The California Family Council seemed satisfied with the revised language. “No one was against defining a hate group as one that supports or advocates for violence or genocide.” the group said in a statement. “But saying that a hate group included an organization that ‘practices the denial of constitutional rights,’ broadens the bill to include any organization that happens to hold religious or political views that conflict with controversial Supreme Court decisions on marriage and abortion. That means the Catholic Church would be considered a hate group under AB 655’s definition, especially after Pope Francis publicly said last week, that the church could not bless same-sex marriages.”

While the controversial language has, for the time being, been removed, it remains to be seen whether this legislation as it is now written still could justify the exclusion of those with conservative views from serving in law enforcement. For example, earlier this year, big tech argued that questioning the results of the 2020 election was inciting violence. Is it really a stretch that the government in California could argue that someone who has protested abortion or same-sex marriage could be accused of supporting/advocating/threatening violence? Could conservative viewpoints be defined by the notoriously left-wing state of California as a “public expression of hate?”

This is California, after all, I think it’s a valid question.

Matt Margolis is the author of Airborne: How The Liberal Media Weaponized The Coronavirus Against Donald Trump, and the bestselling book The Worst President in History: The Legacy of Barack Obama. You can follow Matt on Twitter, Gab, Facebook, MeWe, Heroes, Rumble, and CloutHub. 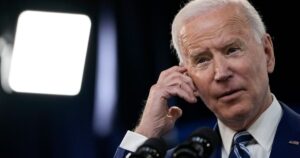