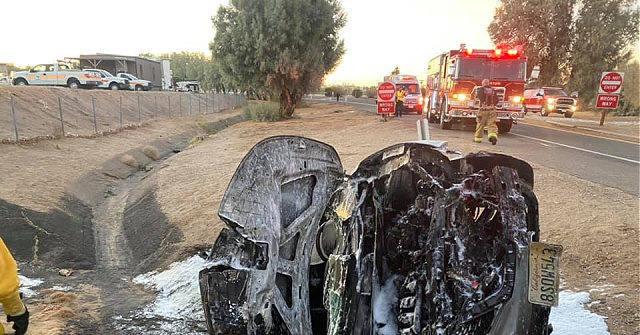 California firefighters rescued a woman from a rolled-over vehicle in the nick of time as fire was rapidly engulfing the car.

Barstow firefighters had been “clearing a structure fire” when they learned of the rolled-over vehicle at 5:27 on November 6, according to the Barstow Fire Protection District.

The scene of the accident was reportedly two miles away from the structure fire that the department was dealing with, the Victorville Daily Press reports.

On November 6, 2021 at 5:27pm Barstow Fire District was clearing a structure fire when they received reports of a…

When Barstow firefighters arrived at the crash site, they discovered the Barstow Marine Corps Logistics Base (MCLB) Fire Department on scene battling the fire, the Victorville Daily Press reports.

A mother and a son were inside the vehicle, though it was not reported to either department that anyone was stuck in the vehicle, Barstow Fire Protection District Chief Nick DiNapoli told Breitbart News.

“We weren’t aware that his mother was in there. There was no report that there were people trapped, initially,” the chief said.

“The son self-extricated, upon arrival from the fire department, through the upper window on the driver’s side,” Chief DiNapoli told Breitbart.

“I just saw him extremely grief-filled; he was just very upset. I walked up to him, and he said, “my mom’s still inside!” Chief DiNapoli told Breitbart. “Obviously, we went to work from there.”

DiNapoli was working on a way to get the woman removed from the vehicle, and “the one thing that confirmed that she was still alive was her hand pressed up against the windshield,” he told Breitbart.

“I was able to — I could confirm that she was tapping on the window, and she was choking on the smoke, and that’s when I started kicking and trying to enter the windshield; I didn’t have a tool on me,” he recounted.

Firefighters worked frantically to remove the windshield as they raced against time. “We had to use an ax to finish it because it was so hard,” DiNapoli stated.

Dinapoli then went into the back row of the car in a successful attempt to extract the woman, and as a result, inhaled plumes of smoke as he did not have a breathing apparatus.

“I grabbed her and started to pull her to the window to where other firefighters were, and then they helped me get her through the window,” the chief told Breitbart News.

The two crash victims sustained minor injuries but “refused treatment and transport, according to the Barstow Fire Protection District.

“The guys did a great job,” DiNapoli stressed.

“Ordinarily, a fire chief doesn’t get involved in the rescues, but in a small department, sometimes we do,” he stated. “I’ve been a firefighter a long time, and I’m still that guy that believes in service before self, but you know we all what to be able to make a difference.”

DiNapoli said when in a high-pressure rescue situation with a life on the line, one has “to do a lot to save a lot.” 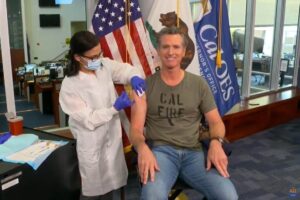 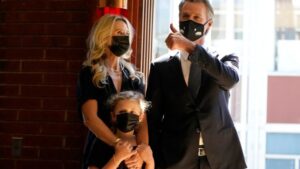