Authored by Jude Clemente via RealClear Energy (emphasis ours),

In 2020, some 9 million Californians were unable to pay their energy bills. The California Public Utilities Commission (CPUC) reports that customers of the major investor-owned electric and gas utilities accumulated $1.15 billion in unpaid bills during the year.

As a “clean energy” climate leader, California seeks to achieve a carbon-free economy before 2050, ensuring that its electrical system can withstand extreme weather events and supply affordable energy to 40 million people.

That last goal might be the biggest challenge. The wind and the sun may be free, but deriving electricity from them is anything but.

California’s residential electricity price in 2020 was $20.50 per kWh, or 55% higher than the national average of $13.20 – an expensive energy problem that is only getting worse (see Figure).

The latest iteration of California’s Renewable Portfolio Standard (RPS), the 100% Clean Energy Act, was enacted in 2018. It requires California utilities to use 100% clean energy by 2045, with an interim requirement of 60% by 2030.

The costs are immense.

Here are just some of the numbers, according to new research from UC Berkeley’s Energy Institute at Haas: 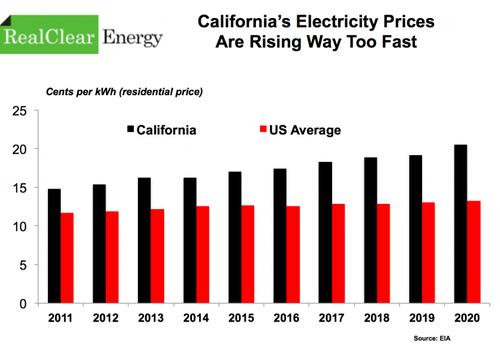 A new report from UC Berkeley attributed California’s high prices to huge fixed costs for generation and grid investments that simply get passed on to customers.

For example, costs for rooftop solar and wildfire mitigation are quickly mounting.

Experts at UCLA found that California’s clean energy programs are benefitting the rich and leaving vulnerable families behind.

California’s expensive electricity problem will only get worse.

From 2020-2022, the state’s big three investor-owned electric utilities (PG&E, SCE, and SDGE) plan to spend $22 billion on hardening their systems by cutting back vegetation and pursuing other measures to fight wildfires, along with the high costs of transmission and other network upgrades.

CPUC concedes that this could increase bundled residential rates 10-20% above the rate of inflation.

Fitch Ratings has praised the credit-worthiness of the Los Angeles Department of Water and Power (LADWP) because it has a “very strong ability to raise revenue.”

A few years ago, the city lifted the caps on adjustment factors and made other changes to ensure that rising costs could be seamlessly passed on to customers.

LADWP has a revenue-decoupling feature in its electric rates, so when sales decline, prices can be raised the following year to compensate for the losses.

In other words, if power usage falls, whether from a shrinking population or businesses leaving, LADWP can simply up its rates to compensate.

Indeed, many criticize California’s cap-and-trade system as a disguised tax, because higher costs just get pushed onto captive consumers.

From Hewlett-Packard to Occidental Petroleum to Tesla, the list of businesses leaving California is growing. These departures represent lost job opportunities for the state’s residents. And higher energy prices disproportionately affect minority communities.

Already battered by Covid-19, the last thing minority communities need is regressive taxes, such as those imposed by California energy policies:

Experts are telling officials that California’s exorbitantly high electricity prices could block the goal of electrification and even turn public sentiment against renewables.

As an input for everything, higher cost energy increases the costs of everything, particularly devastating for food, water, heating/cooling, and other necessities that hold mostly inelastic demand.

More laws across the state are banning natural gas hookups in favor of more expensive electricity, even as gas prices are at their lowest levels in decades.

On an energy-equivalent basis, gas-banning in California is forcing homeowners and renters to pay four times as much for their energy as they would if they were consuming natural gas directly.

Simply put, the goal to “electrify everything” is a de facto energy tax on low- and middle-income Californians that could add more instability to an already proven unstable state power grid.

Minority communities are understandably fighting back.

A coalition of Latino civil rights leaders has sued California over the state’s energy and housing policies. A mandate to force rooftop solar on new homes is expected to worsen the state’s affordable housing problem, adding costs of $12,000 per home.

The California Restaurant Association has also sued the city of Berkeley for its gas ban: according to the Census Bureau’s American Community Survey, 60% of all restaurants in California are owned by minorities.

This is why civil rights leaders like Revs. Al Sharpton and Jesse Jackson are actively supporting natural gas.

The recent Texas energy crisis showed that policies to ensure affordable and reliable energy truly are a matter of life and death. California should take heed of that lesson.