(Natural News)
A new directive from California Governor Gavin Newsom will temporarily allow trucks to carry slightly heavier loads as part of the effort to ease supply chain congestion in the ports of Long Beach and Los Angeles.

The pair of ports normally handles around 40 percent of the country’s seabound shipping. This year, they have been overloaded with record-setting numbers of ships arriving carrying consumer goods, and backlogs have been steadily increasing.

In a press conference, Governor Newsom said: “While that might not pose an immediate relief on the retail front, it will have a substantial benefit on industrial and manufacturing containers that will make their way into the ports of Long Beach and L.A.”

However, not everyone is convinced that increasing the weight limit is a good solution. The Truck Safety Coalition, a group that aims to minimize deaths and injuries in truck-related crashes, asked the governor to keep the extension “extremely short.” The coalition reports that U.S. Department of Transportation data shows higher crash rates for trucks exceeding 80,000 pounds. To put these numbers in perspective, the average passenger car weighs roughly 4,000 pounds.

Some truck drivers have told the media that the higher limit makes them nervous because it means it will take longer for their trucks to come to a stop. Brandon Klagenberg told ABC 10 in Sacramento: “It takes five seconds for the brakes to even start to work. It can be a little unnerving at times, especially in heavy traffic, lots of movements.”

He added that while increasing the weight limit might help in some ways, he believes that there are lots of drivers who are not experienced enough to know how to handle the extra weight.

He added: “And you know, safety is big for me. You know, putting more people at risk on the roadway, I thought can’t be the only solution.”

Studies from the University of Michigan Transportation Research Institute confirm that there is a strong link between greater weights and a higher risk of truck-related deaths. While many states extend weight limits during states of emergency, such as in the days leading up to and following a hurricane, many drivers report that there are a lot more inexperienced truck drivers on the road these days thanks to pushes to alleviate driver shortages, and they fear this could lead to very dangerous situations.

Weight limit isn’t the only problem

Another potential problem is trucks being unable to take advantage of the higher weight limit. According to Freight Waves, while allowing trucks to carry more cargo per trip could theoretically improve efficiency, shipping boxes cannot be topped off with more cargo because they are generally preloaded and sealed at their origin points in keeping with the weight limits for U.S. highways as well as ocean shipping.

Harbor Trucking Association CEO Matt Schrap told American Shipper: “It’s not going to have any impact on what’s happening right now. There is no mechanism that is going to assist this backlog relative to weight.”

Other experts say that it’s not just about being able to haul heavier containers; getting empty containers off the docks remains a major problem, with more than 100,000 empty containers currently at the harbor.

In addition to lifting the restriction on truck weights, the state has opened up 15 Department of Motor Vehicle sites on Saturdays so that more drivers can obtain commercial licenses. This will allow the state to double the number of driving tests that can be provided per month from 5,000 to 9,700. However, putting more inexperienced drivers on the road while this dangerous weight extension is in place could end up costing people’s lives.

24 Nov at 1:37 am
California
Huge police-owned company refuses to use GoFundMe after it banned Rittenhouse – launches ‘Re-Fund The Police’ crowdfunding campaign 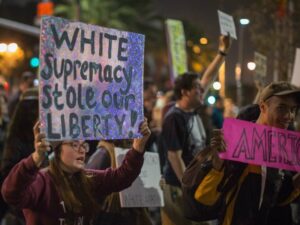