Censoring Claims of Voter Fraud Is More Dangerous Than You Think

Twitter really knows how to help a guy out. Whenever I want to retweet an article about vulnerabilities in our elections, Twitter provides a pop-up asking “do you want to read the article first?”  This even happens when it is my own tweet and my own article.

Do I want to read the article first?  Nope, I wrote it.

I’d wager this week’s Las Vegas Sun piece – “The Big Lie Laid Bare Again, But Will Nevada GOP Candidates Disavow It?” – won’t face any blocks at Twitter asking if you want to read the article first before you retweet it.

We are all familiar with the big stories of cancel culture. Something more insidious is emerging, where ideas and people are canceled on the margins. Twitter is placing obstacles in front of the spread of conservative ideas.

Be careful or be suspended.

I learned this most recently after the organization I run sued the top election official in Fairfax County, Va., just before the election on behalf of a local nonprofit. The official ignored Virginia law and accepted absentee ballot applications without the statutorily required last four digits of the voter’s social security number.  This step is designed to prevent mistakes at the election office and the disenfranchisement of voters. Once a ballot goes to the wrong person by mistake, the original registrant will not be allowed to vote.

Postings about this lawsuit were flagged as controversial or questionable by Twitter. Here’s the problem: The Fairfax County election official admitted he wasn’t requiring the numbers. The facts were not in dispute, at least in written stipulations both parties filed in court.

On Twitter, the undisputed becomes controversial and gets flagged.

All of this is to emphasize that cancel culture is creating new variants, and these variants are more insidious and harder to detect, which is why we need your support now more than ever. By becoming a VIP member, you can help us get our message out without the threat of censorship and social-media bans. There are Silicon Valley pinheads responsible for developing and policing these canceling software codes. They are the modern-day political street gangsters of another age.

“Oh, but these are private parties!” our libertarian friends will crow. Leave them alone!

Indeed, it is true that Twitter is not a government agency. But neither were the Squadre d’Azione, Italy’s Blackshirts. Like Twitter, they were a private group that asked questions like “do you really want to view that newspaper?” or flagged certain Italians for “content-based extra scrutiny.”

I’m not saying these Silicon Valley leftist nerds are pouring castor oil down our throats. What I am saying to the libertarians is, you don’t know your history if you think private groups are entitled to sanctuary in the long struggle between freedom and tyranny.

It has already started. In the 2020 election, documents obtained by Judicial Watch reveal that the California Secretary of State – a government agency for those of you at RStreet – was partnering with Facebook to stomp out speech about election vulnerabilities.

It worked like this: Whenever a government official in Sacramento saw an article they disagreed with about voter fraud or the election, they alerted a unit inside Facebook.

Remember, it is not merely a “unit inside Facebook.” It is employees with names, salaries, ideologies, diplomas, and mortgage payments. I mention this because it is important to stop camouflaging these wrongdoers, these enemies of free speech, with institutional titles.

It isn’t Facebook or the Department of Justice. It’s individual employees making choices about how to use their power.

One of them was Pam Karlan, current principal deputy assistant attorney general in the Justice Department Civil Rights Division. While a tenured law professor, Karlan served on a Facebook goon squad during the 2020 election working on a censorship committee to help divide her fact from her fiction.

Once those on Facebook’s goon squad decided they didn’t like a narrative, it vanished from Facebook or was throttled.

Twitter employees elevate you if your politics align with theirs.

Consider Winsome Sears, the GOP Lt. Governor-elect of Virginia. Even after she won, days went by before she got a coveted blue checkmark at Twitter, the mark of someone in an important position. Among other things, I have been a commissioner appointed by the president of the United States to the United States Commission on Civil Rights for over a year, and still no blue checkmark.

And what of Microsoft? Pay attention to what Microsoft mail servers are sending to your spam folders. One of my email providers recently switched to a Microsoft platform and suddenly my mail from Ted Cruz, Richard Viguerie, and other overtly conservative senders started being herded into an email ghetto.

When I tell Microsoft – “Not Spam” – that only seems to ensure more emails from conservatives are sent to the ghetto.

Am I imagining things? Possibly. But it’s not like I don’t have cause.

I have written scores of articles about election fraud and vulnerabilities over the last decade here at PJ Media. Sometimes I even include the exact headline in a search to find an article. Yet in Google search results, these articles are vanished, like Stalin’s airbrushed companion. Our modern Ministry of Truth has decided to bury them beyond reach.

But the search result I can always count on when I search for a precise headline in quotes and my name in quotes is a piece by Jane C. Timm at NBC News called “Vote Fraud Crusader J. Christian Adams Sparks Outrage.”

Who needs the real article I am looking for when you can have NBC outrage instead?

This raises another variant of cancel culture just as dangerous as castor oil. Journalists are now being paid by leftist philanthropies and parachuted into newsrooms for free or at a reduced rate. All they need to do is write about how election fraud doesn’t exist, attack me, attack Hans von Spakovsky or anyone who writes about election vulnerabilities. They never tell you they enjoy ideologically motivated philanthropy. They are the modern-day propagandists from another time.

It has developed into something more insidious, less obvious. It works now at the margins to throttle ideas. It steals back from conservative voices the efficiencies of the modern information age. It involves partnerships with government agencies and private tech giants dedicated to stamping out ideas and writings. It enjoys libertarians inside the conservative movement perversely protecting the totalitarian march through institutions.

This new dangerous variant has the momentum. It’s time to start taking names. You can partner with us in our efforts to hold the left’s feet to the fire by becoming a VIP member. By becoming a subscriber, you give us the resources we need to continue to expose voter fraud — as we battle censorship and disinformation. Use the promo code 2022 for a 40% discount—the largest we’ve ever offered—this week only. 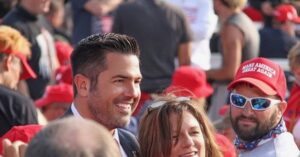