Civil rights groups have filed lawsuits against the state of Georgia, saying it was an example of “blatant racism, represents politics at its very worst and is clearly illegal.” On Wednesday, 72 black executives signed an open letter calling for American corporations to join the resistance. On Wednesday, Delta CEO Ed Bastian did just that.

In a memo circulated to its employee and posted to the Delta “news hub,” Bastian criticized the new law. While he took credit on behalf of Delta and other businesses for helping to “eliminating the most suppressive tactics that some had proposed,” he maintained that “the final bill is unacceptable and does not match Delta’s values.”

“The right to vote is sacred,” Bastian wrote. “It is fundamental to our democracy and those rights not only need to be protected, but easily facilitated in a safe and secure manner.”

After having time to now fully understand all that is in the bill, coupled with discussions with leaders and employees in the Black community, it’s evident that the bill includes provisions that will make it harder for many underrepresented voters, particularly Black voters, to exercise their constitutional right to elect their representatives. That is wrong.

Bastian went a step further, saying “the entire rationale for this bill was based on a lie: that there was widespread voter fraud in Georgia in the 2020 elections.” He called the idea an “excuse” used across the country to “restrict voting rights.”

“There is much work ahead,” the memo continued, assuring employees those at the airline “stand together in our commitment to protect and facilitate your precious right to vote.” Bastian promised the company would be “working with leaders across the political spectrum in states nationwide” and “monitoring legislation in Congress” to that end.

“I know this result in Georgia has caused frustration, anger and pain for many members of our Delta family,” Bastian said. “I commit to you that as we move forward, Delta will continue to do everything in our power to hear and protect your voice and your rights, both in Georgia and nationwide.”

Governor Kemp has repeatedly contested the bill’s framing, saying those who oppose the Election Integrity Act simply have not read it, and that SB 202 “expands early voting and secures our vote-by-mail system to protect the integrity of our elections.” 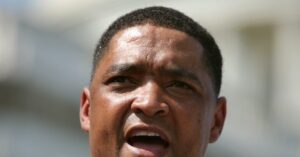 Richmond: Some Republicans 'Would Vote Against Mother's Day' if It Was a Democrat Idea
Mariannette Miller-Meeks: Americans Should Be 'Outraged' at Pelosi's Move to Overturn Iowa Election