The cybersecurity expert who was fired by President Donald Trump this week said the Department of Homeland Security (DHS) never asserted there was no fraud in the 2020 election.

“Rumor Control: I never claimed there wasn’t fraud in the election, [because] that’s not CISA’s job—it’s a law enforcement matter. We did provide info on measures election officials use to prevent and detect dead voters, tho [sic]. Don’t buy it. And think 2x before sharing,” Christopher Krebs, the former head of the Cybersecurity and Infrastructure Security Agency (CISA), wrote on Twitter.

CISA and other groups said in a statement last week that the election was “the most secure in American history,” adding, “There is no evidence that any voting system deleted or lost votes, changed votes, or was in any way compromised.”

CISA omitted to mention that Dominion Voting Systems, whose machines a number of states use, is part of one of the councils that put out the statement.

Trump and his campaign and supporters have pointed to irregularities in battleground states, such as three batches of uncounted ballots found in Georgia that were mostly for Trump, and a county in Michigan that wrongly reported a win by Democratic presidential nominee Joe Biden before changing the results and saying Trump received more than 5,000 votes than initially posted.

Affidavits filed as part of lawsuits in some states showed poll observers and election workers attesting to fraud, including the counting of mysterious ballots arriving in vehicles with out-of-state license plates, and votes for Trump being counted for Biden.

Trump called the group’s statement “highly inaccurate” as he announced on Tuesday that he was firing Krebs.

Krebs said in his first statement following his firing that he was “honored to serve.”

“We did it right,” he added. “Defend Today. Secure Tomorrow.” 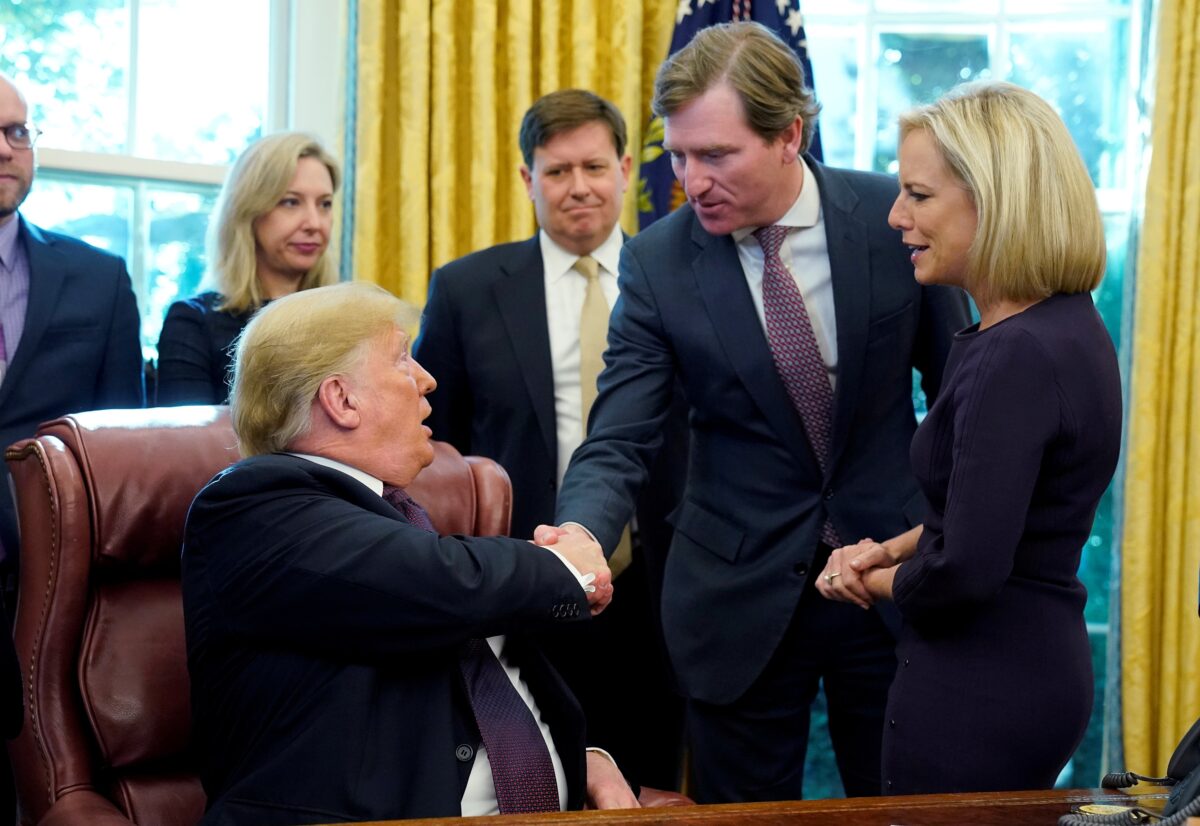 President Donald Trump shakes hands with Chris Krebs, the director of the Cybersecurity and Infrastructure Security Agency, at the White House in Washington on Nov. 16, 2018. (Jonathan Ernst/Reuters)

He then began sharing messages from a number of people with a history of animus against Trump, including CNN’s Jake Tapper and actor Mark Hammill.

Krebs shared one tweet by Hammill that claimed Krebs was fired “for refusing to lie” to the president.

“In defending democracy, do or do not, there is no try. This is the way,” Krebs added.

A number of lawmakers decried the termination, including House Speaker Nancy Pelosi (D-Calif.).

“Christopher Krebs is a deeply respected cybersecurity expert who worked diligently to safeguard our elections. Instead of rewarding this patriotic service, the president has fired Director Krebs for speaking truth to power and rejecting Trump’s campaign of election falsehoods,” she said in a statement this week.

“Chris Krebs is a true patriot. He was instrumental in us having one of the most secure elections in history despite bad actors trying to influence our elections. His service should have been rewarded, not dismissed,” added outgoing Rep. Will Hurd (R-Texas).

White House press secretary Kayleigh McEnany pushed back on the criticism, saying Wednesday that Krebs was misleading with his statement on the election.

“You say that this was the most secure election in American history, as the president rightly pointed out, that may be true from a standpoint of foreign interference,” she said, but “to come out and say it’s the most secure election in American history, that’s just not an accurate statement, and it seems like a partisan attempt to just hit back at the president as he pursues important litigation.”

Jack Phillips and Masooma Haq contributed to this report.