House Republicans Call for Congressional Probe Into Integrity of 2020 Election

The two most senior Republicans on the House Judiciary and Oversight Committees are calling for an immediate congressional investigation into the 2020 general election, amid multiple legal challenges alleging a variety of voting irregularities across a number of battleground states.

“Given your role as leaders of a political party that spent four years baselessly calling into question the legitimacy of the 2016 election with debunked allegations of Russian collusion, you owe it to all Americans to fully examine allegations of actual election errors and misconduct,” they wrote.

Jordan and Comer wrote that Republicans on both Judiciary and Oversight committees had warned earlier this year in a September report (pdf) of how Democrats were “pushing last-minute changes to state election laws and procedures” which would “increase the risk of election-related crimes and errors.”

“Democrats ignored this report, but many of our predications have unfortunately come true,” the two alleged.

“These serious concerns give rise to the urgent need for congressional oversight of the integrity of the 2020 election,” the Republicans wrote. “Our committees must conduct oversight hearings to ensure that Americans have faith in the integrity of our election. We ask that you work with us to schedule and plan these hearings as soon as possible.”

The letter cited multiple examples of concern, from law changes to newly discovered irregularities where over 5,000 new ballots were found in Georgia in Floyd County, Fayette County, and Walton County. 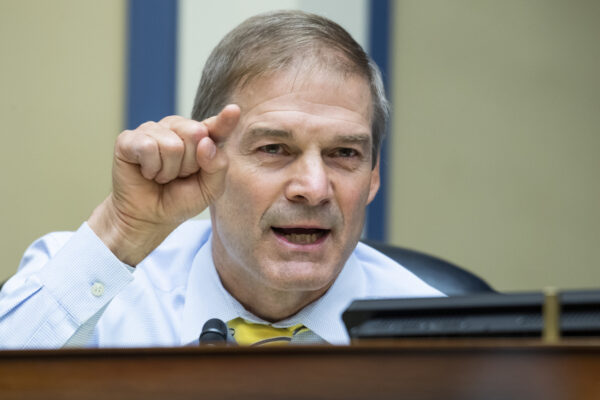 The congressmen acknowledged the situation in Pennsylvania, where the state’s Supreme Court unilaterally extended the deadline to receive mail-in and absentee ballots by three days after Election Day, and ruled that ballots that don’t have a postmark “will be presumed to have been mailed by Election Day unless a preponderance of the evidence demonstrates that it was mailed after Election Day.”

“We warned in our report that this change would create ‘considerable risk for uncertainty and ligitation’—and it did,” they wrote. “Litigation about this last-minute change is currently pending before the U.S. Supreme Court, and Pennsylvania is still counting mail-in and absentee ballots.”

Local officials in some of the counties in Pennsylvania have been alleged to have restricted campaign watchers to properly observe the processing and counting of the mail-in ballots, the two also noted.

In another concern, the congressmen wrote that outdated and inaccurate voter registration rolls made things problematic amid a widespread push for mail-in voting. In California, for example, Gov. Gavin Newsom signed an executive order (pdf) in June to send mail-in ballots to every registered voter. People reported across the state having received multiple ballots, Jordan and Comer noted.

A California judge ruled on Nov. 13 that Newsom had overstepped his authority and ordered a permanent injunction (pdf). The ruling does not affect the results of the 2020 general election.

On Twitter, Comer wrote: “The 2020 election was full of chaos. Congressional oversight is needed for the American people to have faith in the integrity of our election. @RepMaloney and @RepJerryNadler, do your jobs and call a hearing.”

Nadler and Maloney’s press representatives did not immediately respond to The Epoch Times’ request for comment over the letter.

A number of media outlets declared Democratic nominee Joe Biden as president elect on Nov. 7. But President Donald Trump has alleged voter fraud and said any declarations of victory are premature. His campaign has mounted legal challenges in Pennsylvania, Wisconsin, Georgia, Arizona, Nevada, and Michigan, over a variety of alleged voting irregularities.

The Epoch Times isn’t calling the race until the legal battles are resolved and all results are certified.