The termination of two poll workers in Georgia who testified to election irregularities is “deeply disturbing,” three commissioners in Fulton County said.

Bridget Thorne and Susan Voyles were terminated by the county’s Department of Registration and Elections, according to letters obtained by The Epoch Media Group.

Voyles and Thorne had submitted affidavits about things they witnessed during the election. They also spoke to state lawmakers and news outlets about what they saw.

In a joint statement on Monday, Fulton County commissioners Liz Hausmann, Lee Morris, and Bob Ellis said they were disturbed by the decision.

“The timing of their terminations is highly suspect and creates a distinct impression of retaliatory treatment,” the commissioners said.

They urged the Fulton County Board of Elections to investigate the actions of Director Richard Barron and any staff members who were involved in the terminations.

“The integrity and transparency are of utmost importance in Fulton County elections. We will continue to support the efforts of the department to provide results in which voter confidence and trust is assured,” the commissioners wrote. They are three of seven commissioners on the board.

County spokespersons haven’t responded to requests for comment about the terminations of Voyles and Thorne. 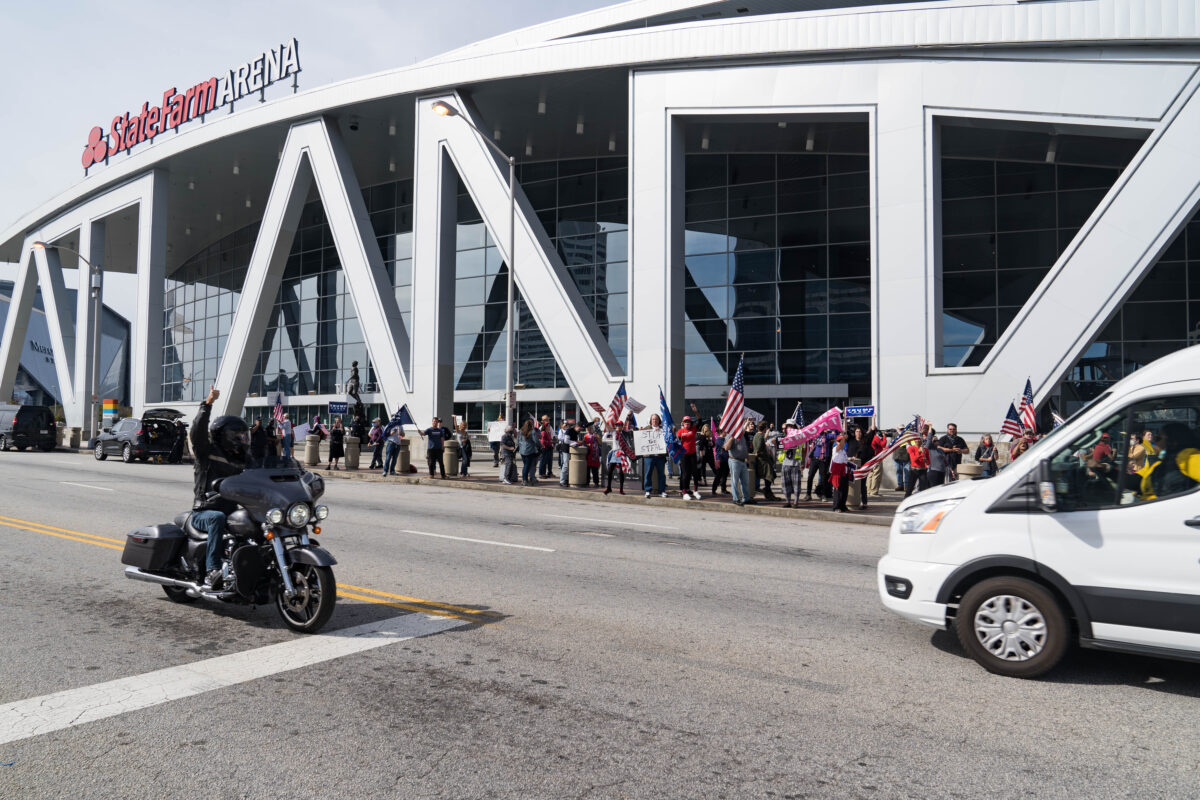 Supporters of President Donald Trump protest outside State Farm Arena as ballots are counted inside, in Atlanta, Ga., on Nov. 5, 2020. (Megan Varner/Getty Images)

“I condemn in the strongest terms the decision by Fulton County elections officials to fire two poll managers purely for raising concerns about the November elections,” he said in a statement.

“Though we have found no credible evidence of widespread fraud, it is important that individuals can raise their voice when they believe they have seen wrongdoing. Retribution against whistleblowers poses a threat to the continued strength and vibrancy of our democracy,” he added.

Fulton County was ground zero for election fraud allegations during the recent election. Election workers counted ballots for over an hour with no monitoring by observers, media, or state officials, according to surveillance footage and Raffensperger’s office. Officials also falsely reported that a pipe burst caused ballot counting to stop for hours. A state senator said in a recent report that the events at the arena seemed to include “coordinated illegal activities.”

Voyles said she received a batch of ballots that were “pristine,” with no creases on them and with similar markings on every one.

Thorne said she saw early voting ballots dumped in the county’s election warehouse, with no security around, prompting chain of custody concerns.

Jessica Corbitt, a county spokeswoman, told The Epoch Times earlier this month that the county has “invested every possible resource into ensuring a free, fair, and transparent election in compliance with all applicable laws.”

“To date we are aware of no credible reports of voter fraud or wrongdoing in Fulton County. Any credible report of such activity will be investigated and addressed as provided by Georgia law,” she added.

Vote Fraud Whistleblower Calls on Charges to be Dropped for Non-Violent Protesters at Jan. 6 Capitol Demonstration

Georgia Republican Perdue Won’t Run for US Senate in 2022