Progressive members of the House of Representatives are preparing bend the knee for an expected Wednesday vote on the $1.9 trillion COVID-19 relief package, before it heads to President Biden’s desk for a signature.

On Monday, Rep. Pramila Jayapal (D-WA) – leader of the Congressional Progressive Caucus, said that she didn’t think the changes made by the Senate were “good policy or good politics,” however she appeared to have moved past it when she minimized them as “relatively minor in the grand scheme of things.”

California progressive Rep. Ro Khanna admitted to “a lot of frustration” over the removal of the minimum wage hike, but predicted that “every Democrat, most likely” will still vote for the package.

“Overall, no one wants to play games with people’s lives. People are suffering. And the fact this is going to get checks and money directly into the pockets of people, and cut child poverty, cut poverty, I think is going to be the overriding concern,” Khanna told CNN.

So – aside from eliminating virtually every progressive demand, the COVID-19 stimulus package is ‘a win’ for House progressives.

According to House Speaker Nancy Pelosi (D-CA), the chamber will hold a Wednesday morning vote “at the latest,” while President Biden said on Monday that he would sign the bill into law “as soon as I can get it.”

On Thursday, Biden will deliver his first prime-time address to the nation to commemorate the one-year anniversary of pandemic lockdowns, where he’s expected to tout the passage of the relief bill.

“He will discuss the many sacrifices that the American people have made over the last year and the grave loss communities and families across the country have suffered,” said White House spox Jen Psaki. “The president will look forward, highlighting the role that Americans will play in beating the virus and moving the country to getting back to normal.” 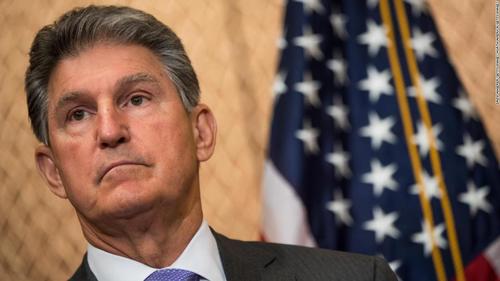 The progressive push for minimum wage and other handouts in the stimulus package was halted in no small part to centrist Democrat Sen. Joe Manchin of West Virginia – whose vote is critical for Democrats to pass legislation given their extremely thin margin of control in the Senate. For any vote to pass by a simple majorityvia a process called ‘reconciliation,’ every single Democrat including Manchin is required to overcome a party-line vote, with Vice President Kamala Harris as the Democratic tie-breaker.

Manchin held up Senate proceedings for several hours last Friday, signaling that he’s going to continue to maximize his leverage for future legislation.

Manchin said on “Axios on HBO” that he’ll block a climate and infrastructure package if Republicans don’t get to have any input in the 50-50 Senate.

“I’m not going to do it through reconciliation,” Manchin said, referring to the budget process that would allow Democrats to bypass a GOP filibuster. “I am not going to get on a bill that cuts them out completely before we start trying.”

But progressives are also flexing their muscles in a House where with their slim majority, Democrats can only afford up to four defections. –The Hill

“I said, ‘It cannot get weakened more. We can’t weaken this thing any more or I don’t know what’s going to happen in the House,’”

9 Mar at 12:53 pm
Mark Kelly Voted for $15 Wage. He Served on the Board of a Company That Fought Wage Increases.
California Port Pileup Leaves Old Records In The Dust