Labor unrest at West Coast ports in 2015 was a landmark event for U.S. importers. Massive congestion amid contentious contract negotiations with the dockworkers union convinced some importers to shift business to East and Gulf Coast ports and diversify supply chains.

A container ship off the coast of California (Photo: Shutterstock)

But despite its lasting impact, what happened in 2015 pales in comparison to what’s unfolding at the ports of Los Angeles and Long Beach in 2021.

Data on the number of ships at anchor in San Pedro Bay is compiled by the Marine Exchange of Southern California. American Shipper compared the Marine Exchange’s 2015 numbers to congestion figures for 2020-21, measuring from the time anchorages started to fill in each case.

The difference turns out to be enormous — and growing by the day. 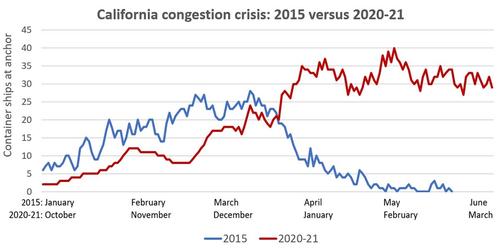 The congestion in 2015 was largely in the first quarter, peaking in mid-March with a high of 28 container ships at anchor.

Capt. Kip Louttit, executive director of the Marine Exchange, noted that the anchorages were cleared just six weeks later. “There was a very quick decline once everyone started working normally again, when the [labor] contract was agreed to,” he told American Shipper.

“This time, the cause [of congestion] is different, so it looks like clearing the backlog will be different,” said Louttit.

Much larger ships at anchor

It’s not just that the numbers are higher this time around. It’s also about duration. The current congestion crisis is already longer than the 2015 incident, with no end in sight.

Even more importantly, the number of container ships at anchor doesn’t tell the whole story.

“The ships were much smaller [in 2015],” said Louttit. Marine Exchange data shows that the vast majority of arriving vessels in 2015 had capacity of under 10,000 twenty-foot equivalent units (TEUs).

If congestion was calculated in terms of TEUs at anchor, not ships, the already wide disparity between the 2015 incident and today’s would be far greater. The same number of ships are carrying far more TEUs now versus then.

The earlier congestion record set in March 2015 may have actually been broken, in terms of TEUs, as far back as mid-December. (No records exist on another West Coast congestion event that occurred in 2004, when box vessels were much smaller than those sailing in 2015 or 2021.)

When will congestion end?

There are at least some signs that the container-shipping capacity crunch may be easing, at least temporarily.

The Container Availability Index produced by Container xChange shows a marked improvement in container-equipment availability in Shanghai. An industry source confirmed to American Shipper that box availability has improved.

Meanwhile, ocean spot rates have stopped climbing, and in some cases, pulled back. According to the Freightos Baltic Daily Index, the Asia-West Coast spot rate (SONAR: FBXD.CNAW) was $4,709 per forty-foot equivalent unit (FEU) on Friday. That’s still astronomically high, but down 4% from $4,922 per FEU in late February.

There are also reports that carriers are not hitting shippers with as much premium charges above the base rate. During a webinar in late January, Nerijus Poskus, a vice-president at Flexport, predicted that the first visible improvement would be “you won’t need to pay thousands of dollars in premiums,” after which the base spot rate would start to pull back.

For the first time in months, Flexport reported last week that “space and equipment is opening up at FAK [base rate] levels” on sailings from China to Los Angeles/Long Beach.

More stimulus around the corner

But these positive developments do not necessarily equate to falling cargo demand and lower port congestion.

The House will soon vote on the latest stimulus package. A fresh round of $1,400 checks could go to Americans next week. In the past, stimulus funding has increased inbound container volumes to Los Angeles and Long Beach and pushed more ships to anchorages. Click for more FreightWaves/American Shipper articles by Greg Miller 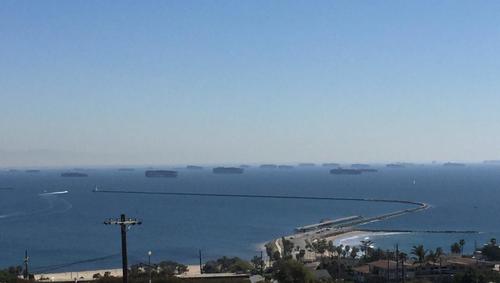 9 Mar at 12:53 pm
California
Frustrated House Progressives Prepare To Bend Knee For Wednesday Stimulus Vote
Poll: 50% of Likely Voters Not Confident Joe Biden Is 'Up to the Job'