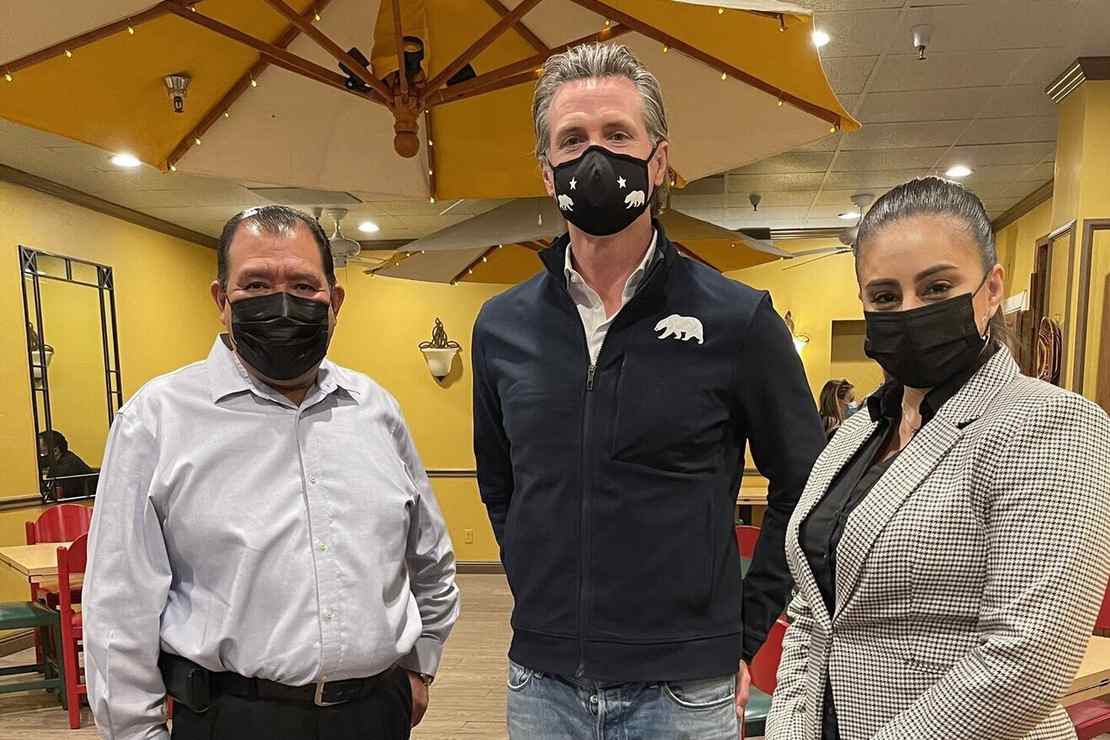 Look for another flood of signatures for the recall Gavin Newsom campaign after the California governor pulled another illegal restaurant stunt, this time not in a lush wine country bistro, but at a Mexican restaurant in Fresno.

Local authoritarians have shut down Fresno restaurants due to being in a Gavin Newsom-approved “purple” COVID zone. This means that not only can you not be inside a restaurant, but if you want to retrieve your take-out order, you have to wait outside. And you’d better be wearing a mask – or else.

Most kids aren’t in school because the state claims “there is widespread COVID-19 transmission in the county and nearly all businesses have to keep indoor operations closed or severely limited.”

But there was Gavin Newsom over the weekend next to a table of food and hanging out inside – also illegal – with actor and comedian George Lopez for about an hour doing what looked to be a PR stunt.

The governor met up with Lopez at the Los Amigos restaurant, which Lopez endorsed during a Facebook Live video.

Though no one else in Fresno could walk into, much less sit down in a Mexican restaurant because it will kill you, the governor, his staff, and George Lopez did it anyway because they’re better, smarter,  and more special and impervious to COVID than you.

Newsom and Lopez created a TikTok video about where to get COVID vaccinations.

As celebrity chef and restaurant owner Andrew Gruel noted, food was served inside to those gathered, which could get a restaurant closed down in Fresno.

“California is the only state where indoor dining is banned. Industry gutted. It’s an explosive topic. Newsom holds an event INSIDE a restaurant, posts video, and group is “dining/drinking” (see pic) – people are actually saying this is OK? If it’s ok for them then open it all up.”

California is the only state where indoor dining is banned. Industry gutted. It’s an explosive topic. Newsom holds an event INSIDE a restaurant, posts video, and group is “dining/drinking” (see pic) – people are actually saying this is OK? If it’s ok for them then open it all up. pic.twitter.com/fRVTdlxVWv

The governor’s office told Fox News that he did not eat lunch at Los Amigos and was there to tout the state’s bail-out program for restaurants.

There are probably thousands of people in Fresno who would be happy to tout the bail-out program if they could sit down inside a restaurant too.

That’s why this week we took immediate action to provide an additional $2B for small business grants for up to $25K for entrepreneurs hurt by #COVID19. pic.twitter.com/kdgFxUyGPB

— Office of the Governor of California (@CAgovernor) February 26, 2021

Chef Gruel also noted that Lopez was unmasked, which could get the restaurant shut down as well.

This is for all the haters who justified the Newsom and Lopez stunt yesterday inside a restaurant, in a county where indoor dining is mandated closed. For those who said “who cares they wore masks”. I’ll let you take it from here. That’s our boy creeping in the back too. pic.twitter.com/dn75xR7GE0

Though people gave the governor a pass for the publicity stunt, it apparently still has not occurred to him that his drastic shutdowns and draconian regulations are taking a huge toll on people and their businesses.

Flouting the rules only makes people angrier, much like his double-standard dinner at the French Laundry.

That’s not even remotely true. There are other states prohibiting indoor dining and majority of states still have indoor dining restrictions.

Newsom POSTED this visit on TikTok because he dropped off a grant to the restaurant owner. The restaurant has outdoor dining.

There’s not as much outrage over Newsom’s latest culinary contretemps but it should make Californians wonder why they should follow the rules when he doesn’t. Are they too stupid to take the precautions needed?

The signatures for the Newsom recall effort are due in about two weeks.  At last report there were 1.8 million signatures gathered.

Things are stacking up against Gavin Newsom! 10 to 30 billion lost to Unemployment fraud, scandal and corruption. Billions handed out in pay to play campaign finance “no bid” contracts, CCP mask orders and crooked back room deals! Unmask the corruption. https://t.co/kARG3Px9T2 pic.twitter.com/AKyUepTk0K

To get the recall and governor-replacement election that would accompany it on the same ballot, the campaign needs 1.5 million valid signatures. Recall supporter Tom Del Beccaro told PJ Media that they hope to have two million signatures ready to go by the deadline.

The owner of Los Amigos is undoubtedly happy to receive a bail-out check from the governor, but we’d bet he’d prefer to have his restaurant open and getting the government off his back.

Updated: Hasbro Appears to Panic After Announcing Mr. Potato Head Is No Longer a Mister