Authored by Susan Crabtree via RealClearPolitics.com,

Amid the fire and fury of Rudy Giuliani’s raucous, 90-minute
press conference Thursday laying out President Trump’s claims of
widespread voter fraud, the former New York City mayor and federal
prosecutor famous for busting the mob in the 1980s, declined to
offer an opinion on one very substantive question: Does he
think the American election system is so rigged and Trump
supporters are so mistrustful of the election process that federal
authorities should monitor the two Georgia Senate runoffs set for
Jan. 5?

“I can’t say what’s going to be done about it. … I
really can’t give you an opinion on that,” Giuliani told a
reporter when the freewheeling, opinion-filled presser shifted to
questions from the media.

“I think every election should learn something from this and
be very, very careful with the next election.”

The reporter who shot the first question at Giuliani brought up
Operation Greylord, an investigation conducted by the FBI, the
IRS’ criminal division, the U.S. Postal Service and the Chicago
police that rooted out court corruption in Cook County, Ill., in
the 1980s.

The three-year undercover operation resulted in the
indictments of 92 judges and other officials, most of whom were
convicted. The trials extended over 10 years.

Even though it was a friendly question, Giuliani didn’t want
to go there.

“I have no idea where the FBI had been for the last four
years,” he remarked.

“…I don’t know what we have to do to get the FBI to wake
up. Maybe we need a new agency to protect us. I have no
idea.”

No matter what you think of Giuliani’s defiant press
conference and Donald Trump’s refusal to concede, trust
in the U.S. election system among nearly half of the nation who
voted for the president is hitting new lows.

A&#2013266080;Morning
Consult survey released this week found the share of
Republicans who trust official election results has dropped by 43
percentage points. In a poll conducted in late October, 70% of
Republicans said official election results will be either
â€œveryâ€ or â€œmost likelyâ€ reliable. In the post-Nov. 3
survey, just 27% say the same, with two-thirds of Republicans
saying the 2020 election was not free and fair.

Giuliani and others assert that widespread fraud is what
shifted Georgia to the Democrats in the presidential race, not the
changing demographics of the state and Stacey Abramsâ€™ much-touted
voter-registration and turnout drives. Fueled by an army of
well-founded liberal groups, Abrams groups registered 800,000
Georgians to vote this year. 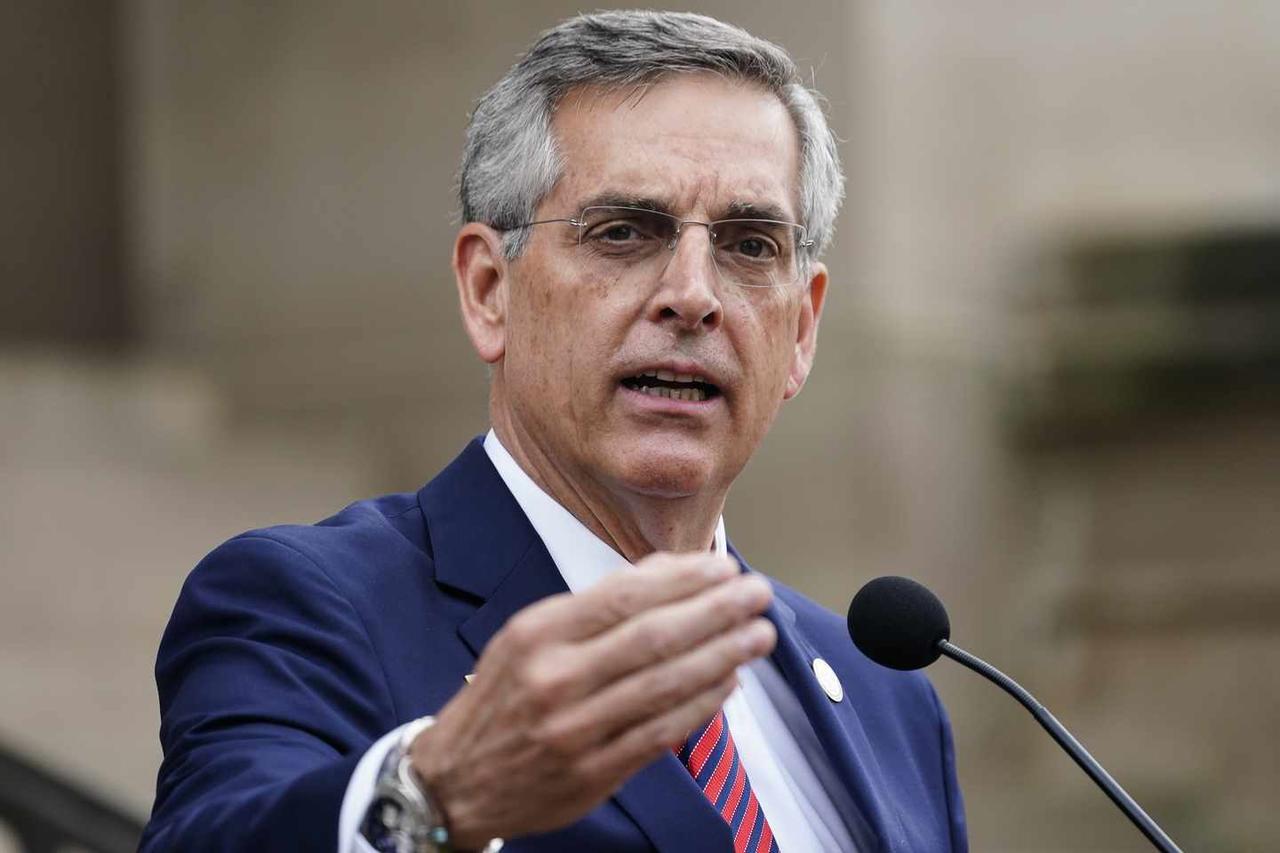 With Senate control hanging in the balance, cash from
deep-pocketed special interest groups is flooding into the Peach
State â€“ some $125 million over the last two weeks â€” and
an army of activists from across the political spectrum
have arrived to organize and orchestrate highly targeted turnout
efforts. The race is now on to get 23,000 of the stateâ€™s
17-year-olds — those who will turn 18 before Jan. 5 — to register
to vote by the Dec. 7 deadline, using Twitch streams, mobile gaming
spots and online algorithm-targeted ads.

So much is riding on the two runoffs pitting GOP Sens. David
Perdue and Kelly Loeffler against, respectively, Democratic
challengers Jon Ossoff and Raphael Warnock, that failed Democratic
presidential candidate Andrew Yang and columnist Tom Friedman
encouraged Democrats to move to the state temporarily and register
to vote.

The pair have since backtracked, arguing their remarks
were flippant and meant to underscore the contestâ€™s high
stakes. Still, some wealthy California Democrats
are reportedly traveling
to Georgia to boost turnout operations and do whatever is necessary
to help Democrats win the seats.

Whether outside parties flocking there could backfire on
Democrats by fueling parochial pride is an open question, but
Republicans are on high alert. Georgia Attorney
General Chris Carr last week warned that moving to the state
temporarily to vote is a felony offense that carries a 10-year
prison sentence and a maximum $100,000 fine.

Though Yang insists it was obvious he was joking, conservatives
deeply concerned about election fraud arenâ€™t laughing.

Hans von Spakovsky, an election law expert at the Heritage
Foundation who has advocated for stricter voting laws, is urging
Georgia Republicans to implement a detailed plan before the runoff
to combat several types of potential voter fraud.

Republican officials should comb through voter registration
lists and divide them up by voters in each precinct, he told
RealClearPolitics. Every polling location has a local monitoring
committee, he explained, and each chairman should get the list of
voters for that precinct. Voter registration lists can then be
checked against the DMVâ€™s list of residents and other state
record databases.

â€œI would distribute the list and say, â€˜Look at
everybody in your neighborhood who goes to that polling place —
are there people on it that are not part of your community?â€™ Go
over the list and check addressesâ€ and ask neighbors if
people recently moved there, he said.

â€œIf thereâ€™s a single family home in your
neighborhood, and thereâ€™s 20 people registered there, okay,
thatâ€™s a problem,â€ he said.

â€œThey should immediately bring that to the attention of local
officials. Thatâ€™s what they ought to be doing now.â€

But the No. 1 priority for combating voting fraud — or even the
perception of it — should be to have poll workers, not
just poll watchers, actually opening and counting mail-in
ballots, providing eyes and ears on the ground, he
argued.

Von Spakovsky, who worked on behalf of Republicans in the 2000
Florida Bush-Gore recount, said Republicans must demand more
transparency. He cited media reports that only one observer per 10
tables of vote counting was allowed during the Georgia recount
because of COVID-19 social distancing rules.

â€œWhoa, what is going on with that?â€ he asked.
â€œThere ought to be an observer at every single table
where the recount is occurring. Thatâ€™s what they did in Florida.
I know. I was there.â€

Heritage Action, the Heritage Foundationâ€™s political arm, says
itâ€™s mobilizing 20,000 of its local members in Georgia for
door-knocking, phone calls and texts. Itâ€™s also recruiting a team
of at least 100 poll workers to watch for any attempts to
manipulate election results. Jenny Beth Martin, president of the
Tea Party Patriots Citizens Fund, said her group plans to train
poll workers and poll watchers on what to look for. â€œWe will be
engaging in precinct operations,â€ she told RCP.

All of these efforts take manpower, and Republicans are
privately fretting that the GOP didnâ€™t do enough to prevent the
runoff by countering Abramsâ€™ extensive grassroots
activities. As Giuliani signaled, they also donâ€™t trust
the FBI or other federal authorities to do anything to guard
against or investigate fraud if thereâ€™s evidence of it
occurring.

John Yoo, a conservative lawyer who worked in the George W. Bush
Justice administration, says Trumpâ€™s concerns about expanded
mail-in voting leading to more opportunities for voter fraud are
well-founded. President Jimmy Carter and James A. Baker III,
secretary of state under George H.W. Bush, came to the same
conclusion in 2005 after heading the Commission on Federal Election
Reform, which concluded that â€œabsentee ballots remain the largest
source of potential voter fraud.â€

The practice of targeting senior citizen nursing homes and
hospitals and helping elderly voters fill out their ballots is such
a common practice that thereâ€™s a name for it among political
operatives â€“ â€œgranny farming.â€ During the
pandemic, there has been new concern about disenfranchising elderly
peopleâ€™s right to vote because of older Americansâ€™ reluctance
to go to the polls. But that fear has been abused, Yoo
asserted.

Critics of ballot harvesting, or the
third-party collection of mail-in ballots, often refer to an
incident uncovered by the Miami Herald in 1998 in which a
70-year-old woman recovering from a stroke complained about being
badgered for her absentee ballot by a political operative who then
filled it out and took it from her.

â€œWhat everyone should be concerned about is if we see
suspicious levels of voting – more votes than residents – at
nursing homes or group homes,â€ Yoo said. He skeptical,
however, that a significant number of people have moved illegally
to vote.

Instead, he says the two areas of greatest concern are ballot
harvesting and the tabulation or accounting process of all
ballots.

Trumpâ€™s legal team has taken aim at the electronic
voting tabulation process and the Dominion Voting System machines
involved. Sidney Powell, one of Trumpâ€™s lawyers, insists
that the president won by â€œmillions of votesâ€ and that the
Dominion software altered the tallies. She has cited an affidavit
signed by a former military official from Venezuela that the system
was used to electronically flip votes for strongmen Hugo Chavez and
his successor, Nicolas Maduro.

The state of Georgia uses Dominion machines and
software, but Raffensberger, the secretary of state, said
an audit of those machines found no signs of foul play.

And Jason Snead, the executive director of the conservative
Honest Elections Project, says that Trumpâ€™s legal team has yet to
provide enough evidence of widespread fraud for him to believe
Dominion altered or tampered with â€œmillions of votes or anything
along those lines.â€

â€œThere are clearly issues that happened on Election Day, and
some of them have been well documented,â€ he said. â€œSome
counties in a few states had problems with some equipment, but
nothing that was really outside the norm for these sorts of
systems.â€

Snead said those making election laws have the responsibility to
ensure that theyâ€™re managing the demand for increased mail-in
voting options during COVID in a way â€œthat will ensure that those
ballots are properly protected and that the election system as
whole runs smoothly, efficiently and securely.â€

One of the problems is that election fraud is hard to
prove, and local district attorneys have shown little
appetite for prosecuting it. Such cases take a lot of time to
investigate, and state legislatures havenâ€™t made the issue a
funding priority, von Spakovsky and others say.

In 2018 Arizona Attorney General Mark Brnovich launched an
election integrity unit to â€œpreserve public confidence in the
integrity of our elections by vigilantly defending ballot
safeguards and common-sense voting laws.â€

On Tuesday Brnovich publicly called on critics of the election
process to come forward with â€œfacts and evidenceâ€ so his office
can investigate.

After an election that has fueled so much distrust in the
system, von Spakosvksy is urging all states to create similar
election integrity units in their attorney general offices and for
legislatures to provide enough resources for those units to do a
thorough job.

Snead said Brnovich is pursuing a â€œblockbusterâ€ ballot
harvesting case dealing with two provisions of Arizona law that the
Supreme Court has said it would review this fall. One aspect deals
with state laws requiring people to vote at their specific precinct
and another to restrict ballot harvesting, limiting who can collect
and deliver a personâ€™s ballot to a family member, household
member or caregiver.

Depending on how the high court rules, more restrictive voting
laws in several states could be on the chopping block — or
enshrined as needed safeguards.

â€œSo this is going to be a big, big case,â€ he said.
â€œIt has the potential to help define and shape election law going
forward.â€