Remington Firearms, the oldest gun manufacturer in America, announced it intends to move its headquarters from New York to Georgia on Monday, citing the progressive state’s hostility to the Second Amendment.

Remington intends to invest more than $100 million in Georgia’s economy through hiring at its new headquarters, which will be located in La Grange, Georgia. The company anticipates hiring more than 800 people.

Remington is one of several legacy gun companies to move from Democrat-dominated states to red states, following Smith & Wesson, which moved from Massachusetts to Tennessee earlier this year.

“We are very excited to come to Georgia, a state that not only welcomes business but enthusiastically supports and welcomes companies in the firearms industry,” said Remington CEO Ken D’Arcy in a statement regarding the move.

Governor Brian Kemp also welcomed Remington to the state in a press release. “Georgia’s firearms industry is responsible for thousands of jobs and millions of dollars of investment in our communities,” said Kemp. “I am a proud owner of some of Remington’s first-class product, and now, I am excited to welcome them to their new home in the Peach State.”

New York’s constant legal scrutiny and vexatious lawsuits against gun companies is believed to have played a huge part in the move.

Remington still manufactures AR-15, although the company is slightly hesitant about marketing the firearms, having been hit with a series of dubious lawsuits from families of people victimized by school shooters. The company declared bankruptcy, with some American Second Amendment advocates skeptical of the quality of some of the company’s newer firearms. However, Remington has been in the business for more than two centuries, and their track record as a gun manufacturer is established. 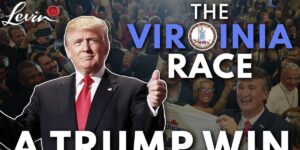 Mark Levin: Here's why the Virginia race was a TRUMP WIN

Stacey Abrams to Rachel Maddow: 'I did not challenge the outcome of the election' for Georgia governor in 2018. Also Stacey Abrams: Election was 'stolen.'