Judge Denies Effort to Have 200,000 People Restored to Georgia Voter Rolls Before Runoffs

A federal judge on Wednesday rejected an effort to place nearly 200,000 names back on Georgia voter rolls before next month’s Senate runoff elections.

“Plaintiffs have shown that Georgia’s list maintenance process may not be accurate in identifying voters who have actually moved. But they have not shown, or even alleged, that the process is applied differently to any class of voters,” Judge Steve Jones of the U.S. District Court for the Northern District of Georgia wrote in his ruling. “Here, there is no evidence at this stage that the list maintenance process is not uniformly applied.”

The judge said putting the names back on the rolls would “impose a severe burden” on the office of Secretary of State Brad Raffensperger as it administers the election, and create confusion.

He also noted that voters had a year to re-register themselves, and some likely did so.

“Plaintiffs acknowledge that they do not know how many people on their list of cancelled registrations may have re-registered before Dec. 7, 2020,” Jones wrote. “Thus, the risk of dual registrations and voter confusion is high.”

Still, the judge said there “may be discrepancies” in records used to cancel voter registrations and strongly encouraged the parties to meet and figure out “the explanation, if any, for the alleged inaccuracies.” 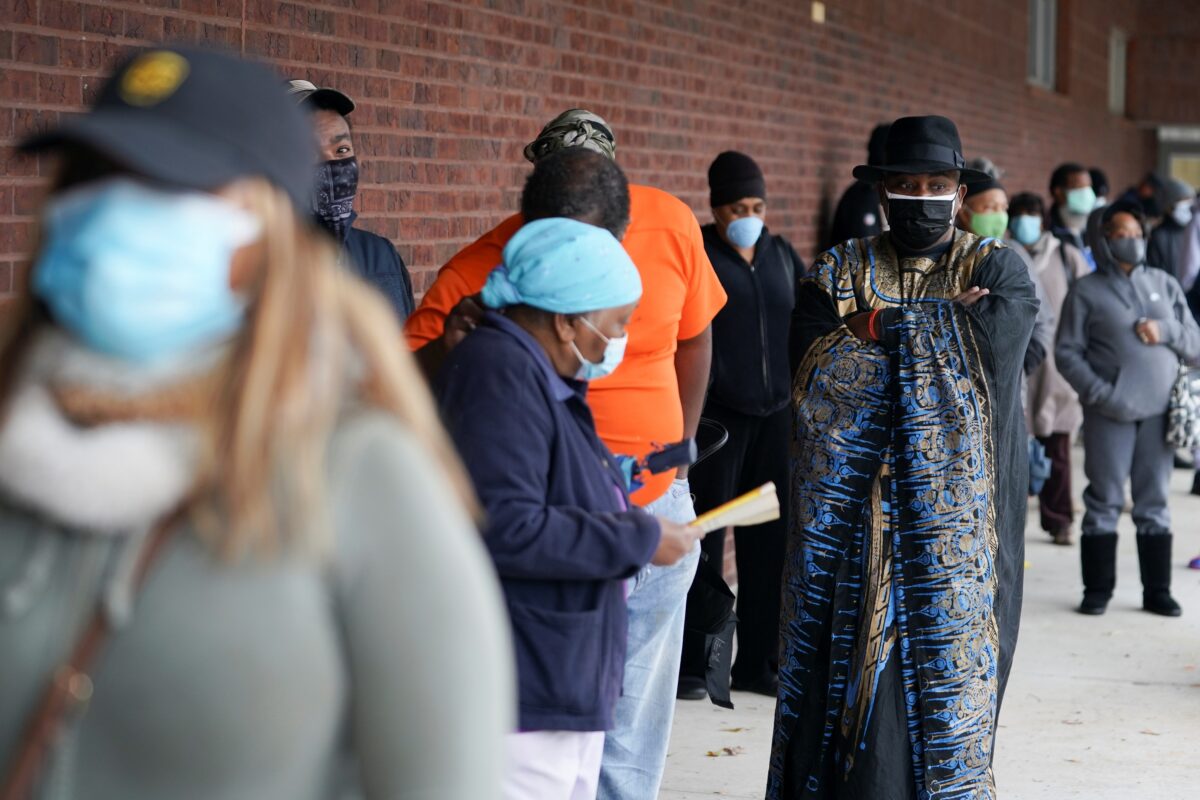 Early voters queue to cast their votes in two run-off elections that could determine control of the U.S. Senate, in Atlanta, Ga., on Dec. 14, 2020. (Elijah Nouvelage/Reuters)

An attorney for the American Civil Liberties Union (ACLU), one of the plaintiffs in Black Voters Matter Fund v. Raffensperger, didn’t respond to a request for comment.

Raffensperger, a Republican, said in a statement that “this lawsuit from left-leaning groups—like the recent ones from the right—was based on conjecture by unqualified ‘experts’ drawn from sloppy analysis.”

“This office abides by the law regardless of criticism and oversees fair and accurate elections open to all eligible voters—but only eligible Georgia voters,” he added.

The election official said his office did remove the voters but said the removal was part of routine maintenance as required by state and federal law.

Before voters were removed, each person was sent a letter instructing them to return an attached postcard if they wanted to stay registered to vote. A similar letter was sent four years prior; in the intervening time, they were listed as inactive on the rolls but still on them.

Plaintiffs had alleged that the cancellation of registrations was “based on the baseless claim that these voters had moved.” They said the way the cancellations were done violated the National Voter Registration Act.

The ACLU alleged in a report in September that none of the voters that were removed had moved.

“There are tens of thousands of Georgia voters who have registered, properly maintained a residence in the same county, and nevertheless have had their registration deleted by the state of Georgia,” Andrea Young, executive director of the ACLU of Georgia, said at the time. “We encourage everyone to check their voter status. Many people on this state’s list have every right to assume they are registered to vote. We want you to have time to re-register.”