A Michigan business owner who interrupted a news reporter on live television and delivered a rant that later went viral, explained the struggle that people like him have faced due to pandemic lockdowns and other restrictions.

As WWMT West Michigan reporter Travarious Haywood was preparing to respond to questions from an in-studio reporter on Thursday regarding a court ruling against a lawsuit challenging an emergency order from Michigan health authorities halting all indoor social gatherings, his live broadcast was interrupted.

Dave Morris, owner of D&R’s Daily Grind Cafe in Portage, walked into the frame and said, “my government leaders have abandoned me.”

Haywood turned around and engaged with Morris, asking him to elaborate on his grievance, which he did, with the clip of their ensuing interaction viewed over 2.8 million times on social media.

Morris approached the reporter and said, “$4 trillion dollars of stimulus money and they gave it to who? Special interests and campaign donors,” before explaining that he owns the nearby cafe near which Haywood was standing for his broadcast.

The Michigan Department of Health and Human Services on Nov. 15 issued an emergency order enacting a three-week pause on indoor social gatherings and other group activities, and restricting bars and restaurants to outdoor dining, carry-out, and delivery only, to reduce the spiking COVID-19 cases in the state. COVID-19 is the disease the CCP (Chinese Communist Party) virus causes. 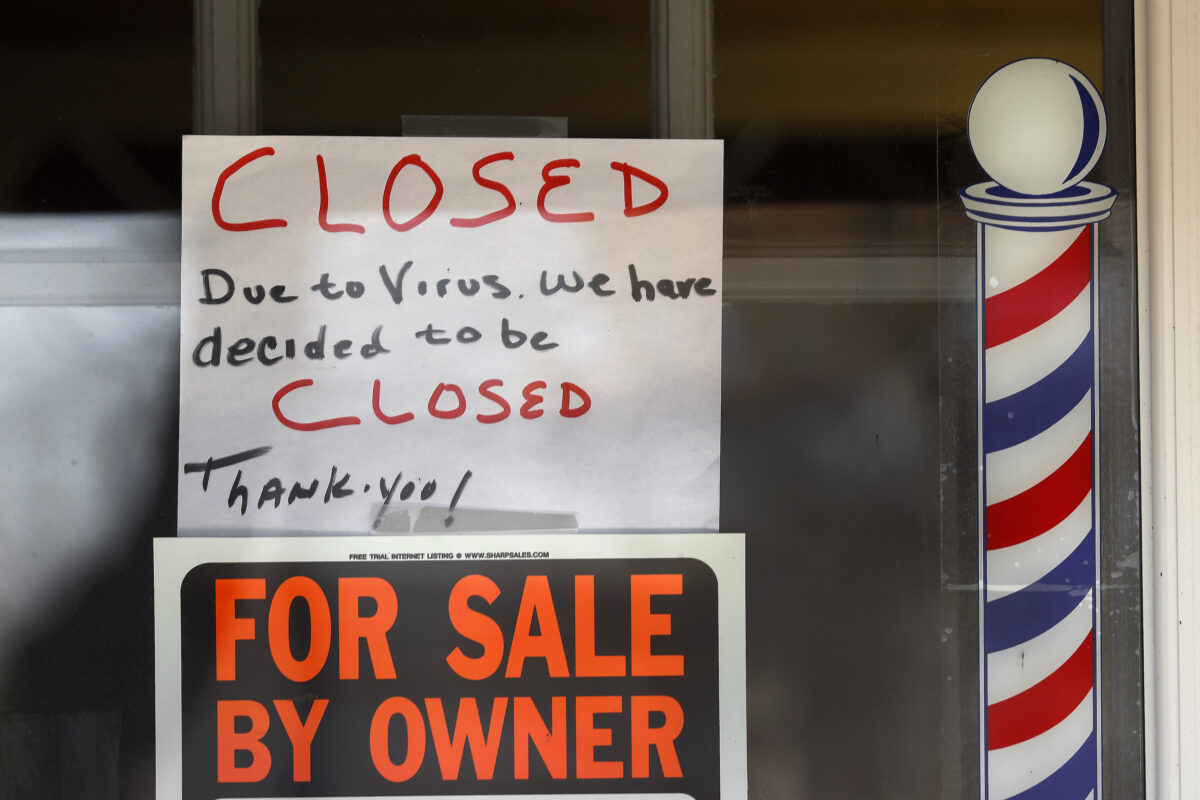 “For Sale By Owner” and “Closed Due to Virus” signs are displayed in the window of Images On Mack in Grosse Pointe Woods, Mich., on April 2, 2020. (Paul Sancya/AP Photo)

In response to the order, some businesses, including Morris’s cafe, ignored the order and continued to operate. In an earlier report by WWMT, Morris explained he was choosing to stay open to stave off bankruptcy.

“I feel everybody needs to stand up,” Morris continued. “There was enough money to give every family, every family in this country $20,000 to go home for two months. They chose to give it to special interests and campaign donors, the Kennedy Space Center, and they abandoned us.”

“You could have given me money … I’d gladly walk away for 60 days and let this virus settle down,” Morris said.

Asked if he plans to violate the state order and remain open, the cafe owner replied, “this isn’t an order, this is a conspiracy, this is tyranny.”

He said his message for other business owners was to “wake up, stand up, this is America, be free!”

Haywood posted the video of their interaction on Twitter, where it went viral. 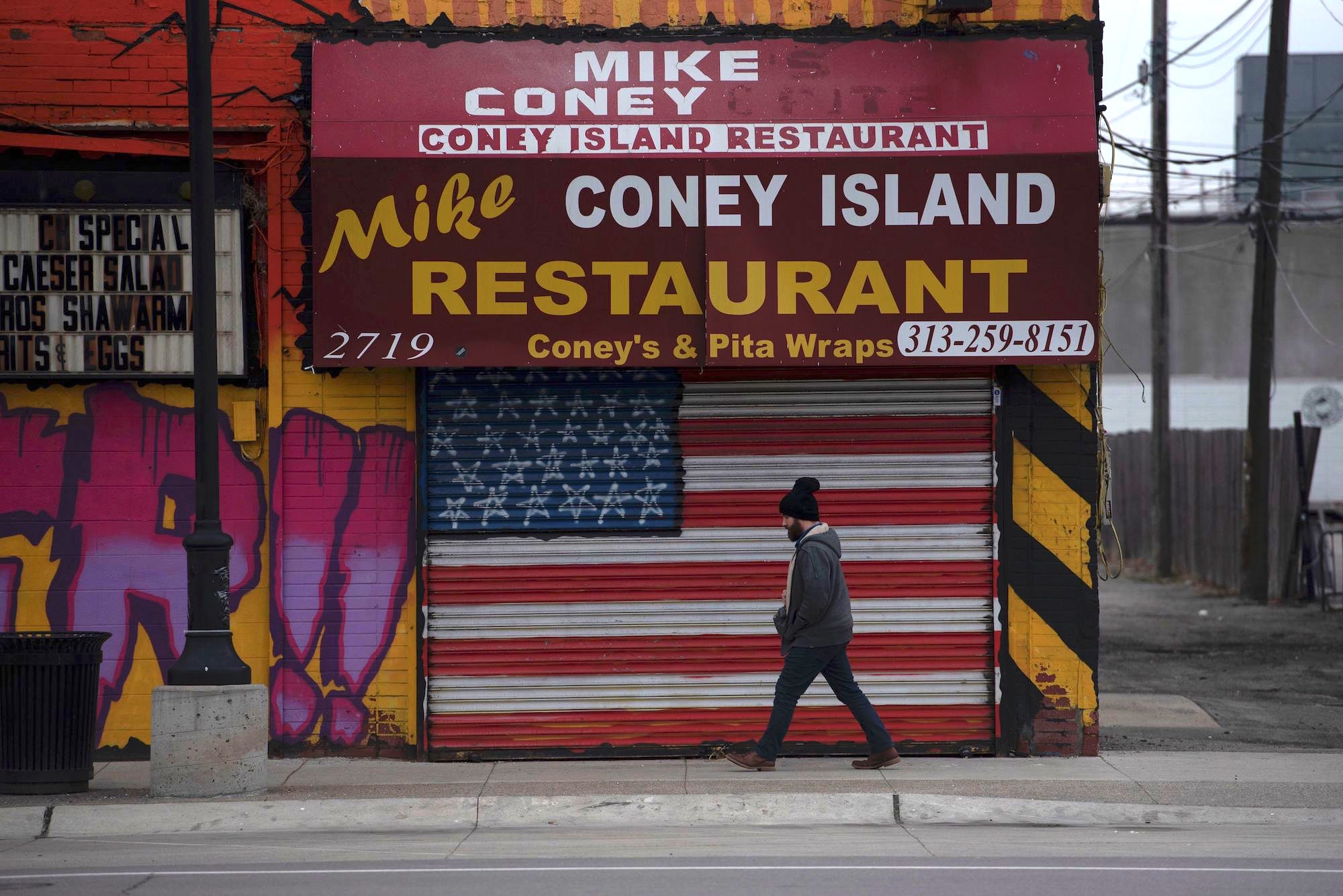 A man passes a closed restaurant in Detroit, Mich., on March 24, 2020. (Seth Herald/AFP via Getty Images)

In a follow-up piece on Morris’s plight, Haywood reported that the restaurant owner was pushing back against the restrictions by refusing to shutter his business. Morris said he had received a cease-and-desist order from health authorities and that he had, as of Wednesday, already been hit with $6,000 in fines, but insisted that he would ignore the order and continue operating.

Morris, in an interview with Fox News, said, “there are 3,000 businesses in Michigan that are closed right now, and they’re failing daily,” adding that he applied for funds from the federal Paycheck Protection Program (PPP) on the first day that they were made available back in March, but was told the next day that the money had already run out.

He told the outlet that, since March, he has received $2,400 in PPP funds. The popular program, which offered businesses forgivable loans if they kept people on the payroll, ran out of funds quickly, though they were replenished in an emergency relief bill. Lawmakers on both sides of the aisle have been calling for another top-up as part of the next relief package, although talks have remained stalled for months.

U.S. District Judge Paul Maloney on Wednesday ruled against a lawsuit brought by the Michigan Restaurant and Lodging Association, which sought a temporary restraining order against the ban on indoor dining, Fox News reported.