No, The Georgia Vote-Counting Video Was Not ‘Debunked.’ Not Even Close

A Big Tech-backed “fact” “checking” outfit claimed to debunk explosive evidence in support of Republicans’ claims of significant election problems at a Thursday Georgia Senate hearing. It didn’t. Not even close.

Newly discovered security footage from Georgia’s State Farm Arena showed dozens of ballot counters, media, and Republican observers leaving en masse at the same time from the ballot-counting area for Fulton County. After they left, a small remnant of about four workers began pulling trunks containing thousands of ballots from underneath a table with a long tablecloth and running them through machines.

The footage supported claims from Republicans that they were told counting had stopped for the night, only to find out hours later that it had kept going on. You can and should watch the 12-minute portion of the testimony from Jacki Pick here.

On Friday morning, a group called Lead Stories published a “hoax alert” falsely claiming to have debunked the security video. The Washington Post, Newsweek, and other outlets followed along, criticizing non-leftist journalists for giving the video traction. In fact, none of the claims made by the Republicans were debunked.

Lead Stories’ “fact” “check” says government officials told them everything was fine with the counting, that the ballots were in “containers — not suitcases,” and that “party observers were never told to leave because counting was over for the night.”

Leaving aside whether relying solely and uncritically on government officials’ claims constitutes anything close to a “fact” “check,” let’s look at the claim that party observers were never told that counting was over for the night. In Lead Stories’ regurgitation of the government officials’ claims, only the people who cut open the absentee ballot envelopes were sent home, while ballot counters and scanners were retained and kept working — and no one told the press or other observers they were done counting.

Were Republican Poll Watchers and the Media Told Counting Had Stopped For The Night?

That claim, which he has repeated consistently, is backed by sworn affidavits from two Republican observers, who further allege they were kept an unreasonable distance from the ballots even while they were at State Farm Arena, making it completely impossible to meaningfully do their jobs. (The video, which shows the room from four different angles, fully supports the claim that poll watchers were kept away from meaningful observation of ballot handling.)

The observers say that they arrived for their observation jobs around 8 p.m. They say in the first half of the 10 o’clock hour, a woman with blonde braids who appeared to be a supervisor “yelled out” to those present in the room that they would stop working for the night and would resume in the morning. The Republican poll watchers said they asked Fulton County Elections Spokesperson Regina Waller questions about the status of the ballot count multiples times but that she refused to answer.

OK, so on the one hand you have sworn affidavits from observers saying that supervisors told ballot counters to go home for the evening shortly after 10 p.m. and a video showing everyone leaving en masse at that time. And on the other hand, you have two government officials promising that no one was told that counting was over. Is there any other evidence to consider?

Well, on election night, ABC News reported that ballot counters were sent home at the time that the Republican observers said everyone was told counting had stopped. Their source? Regina Waller: 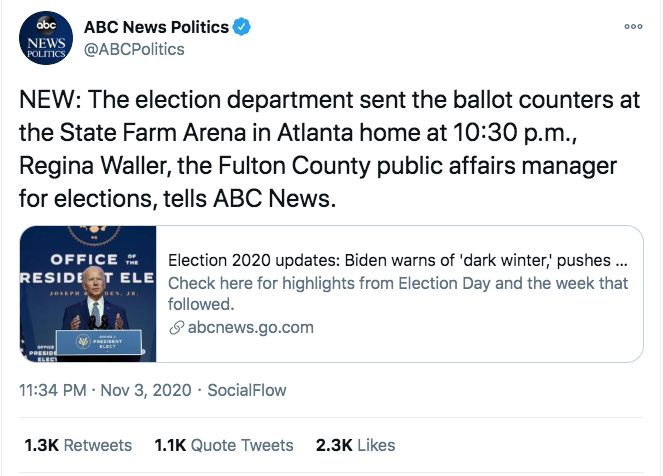 Local NBC journalists on site that night independently confirmed “they were told counting was done for the night” and given no indication it would continue before the next morning. The Atlanta Journal-Constitution even reported of a “plan” to stop scanning ballots at the same time the poll watchers said things were shut down:

Some debunking there, guys. The video supports the claim from the affiants.

Incidentally, most of the linked stories include mention of a major election day story of a burst pipe delaying vote counting. Some even said it was reportedly a water main.

In a new affidavit, the aforementioned Watson swore, “Our investigation revealed that the incident initially reported as a water leak late in the evening on November 3rd was actually a urinal that had overflowed early in the morning of November 3rd.”

She also said that her investigation shows that the press and observers “simply left on their own,” although she later said workers put ballots underneath the table because they thought that counting was stopping for the evening. “This was done because employees thought that they were done for the night and were closing up and ready to leave,” she claimed.

Was a State Election Board Monitor Present While Partisan Observers Were Gone?

A Newsweek story quoted someone saying that Secretary of State Brad Raffensperger’s office claimed that a designated election observer was “at that spot all night, the entire time.” Lead Stories emphasizes that while partisan observers may not have been present, an “unnamed state election board monitor” was present:

A state election board monitor, who asked for his name not to be used due to safety concerns, told Lead Stories on the phone on December 3, 2020, that he was present at the vote counting location beginning at 11:52 p.m., after leaving briefly at earlier in the evening. He then stayed until about 12:45 a.m., when the work that night was completed.

The deputy chief investigator for the secretary of state’s office was present beginning at 12:15 a.m. November 4, he said.

The monitor only claims to have been present in the processing room from 11:52 p.m. on election night to 12:45 a.m., the following morning, or less than an hour. That means there were neither partisan monitors nor the state election board monitor for more than an hour after ballots began being scanned at 10:35 p.m.

What the “fact” “check” shows, then, is the monitor admitting he wasn’t present for much of the time in question, contrary to claims made by the Secretary of State’s office. For whatever it’s worth, the same monitor is the subject of an affidavit from another witness, devoted exclusively to concerns about the monitor’s conduct prior to the late hours on election day, according to a member of the Trump team. The claims include that he was sleeping on the job and staring at his phone.

Incidentally, Fulton County had such massive problems managing elections earlier this year that they were fined and forced into a settlement agreement that included a requirement that they be independently monitored, according to the Atlanta Journal-Constitution:

To avoid the fine, Fulton must maintain verifiable levels of operational competence by properly processing absentee ballots; keeping a force of 2,200 properly trained poll workers; providing at least 24 early voting sites; striving to process 100 voters per hour at any site; having a technical support staff member at every site; and creating a post-election audit.

The consent order also requires Fulton to regularly update the Board on its pool of poll workers.

The issue in the consent order requiring the most negotiation was over an independent elections monitor.

They agreed on Carter Jones, who spent time in Africa helping countries improve their elections…

The U.S. Department of Justice also sent an election monitor to Fulton County.

Contrary to the media impression that a state monitor is sufficient oversight, the press and partisan observers are just as if not more important. The false public claims about a pause in counting led to the departure of the press and Republican observers.

As for the deputy chief investigator who arrived at 12:15 on Nov. 4, when the ballot-scanning activities were nearly completed, the video shows the person entering the large room, glancing around, and talking on his phone. At no point have the “fact” “checkers” or other media figures asked what prompted an investigator to be dispatched to the State Farm Arena at that time.

The Trump legal team, for its part, said the Fulton County situation violated Georgia laws that require election tabulation to be open to public view. The witness affidavits say the denial of meaningful access to the counting process kept Republican observers from being able to actually observe what happened. The Republican observers, the press, and the public were kept to a roped-off area too far from the ballot activity to matter, which doesn’t comply with Georgia law, they say.

There Are Much Bigger Georgia Claims

While conspiracy theories about election fraud abound — ranging from The New York Times’ claim that there was no election fraud anywhere in the entire country to dramatic claims of a global conspiracy involving voting machines, the Trump campaign’s official claims are sober and serious. State Republican Chairman David Shafer and President Donald Trump filed a criminal complaint in state court on Friday regarding tens of thousands of votes that they say were fraudulent.

Trump and Shafer allege, for example, that votes came from:

The lawsuit further alleges that mail-in ballots received nearly no scrutiny as standards for contesting questionable ballots were made unreasonably difficult.

A Note On Lead Stories

The “fact” “check” was originally written by Alan Duke and Hallie Golden, although Golden’s name was removed from later versions of the story. Golden is a freelance writer whose work regularly appears in The Guardian, a left-wing publication. Duke, a CNN entertainment reporter, retired from the left-wing outlet after 26 years.

Earlier versions of the story included a mathematical error about whether the votes that were counted after observers left State Farm Arena could have affected the outcome of the election. The authors falsely wrote that they couldn’t have, when they could have.

Lead Stories claims it is funded by Facebook, Google, and ByteDance. The latter is the Beijing-based and China Communist Party-linked company known for TikTok. Facebook and Google have suppressed journalism deemed harmful to Trump’s 2020 election opponent Joe Biden. The Trump administration has said TikTok’s ties to the Chinese Communist government makes it a national security threat.

7 Dec 2020
Georgia
Matthew McConaughey Calls Out Hypocrisy Of Hollywood Elite Mocking Trump Voters Refusing To Accept A Biden Victory
Rabobank: Things Might Get Stormy In The Next 48 Hours In The US Election