Pelosi to Bring $2,000 Direct Payments to Vote on Monday

House Speaker Nancy Pelosi (D-Calif.) said Thursday that she will call House members back on Monday to hold a recorded vote on the $2,000 direct payment measure requested by President Donald Trump.

“Monday, I will bring the House back to a session where we will hold a recorded vote on our standalone bill to increase economic impact payments to $2,000,” Pelosi said in a statement. “To vote against this bill is to deny the financial hardship that families face and to deny them the relief they need,” she added.

On Tuesday Trump criticized the omnibus spending package that had been finalized by Congress on Monday, saying that more money was going to foreign countries and lobbyists than to the American people.

He urged Congress to increase direct payments to American families from $600 to $2,000.

On Thursday House Democrats filed a unanimous consent request for $2,000 direct payments, which was blocked by Republicans. They have so far been silent about the reasons for blocking the increased payments, but they did address the portion of the spending package that sends millions overseas to help foreign countries. 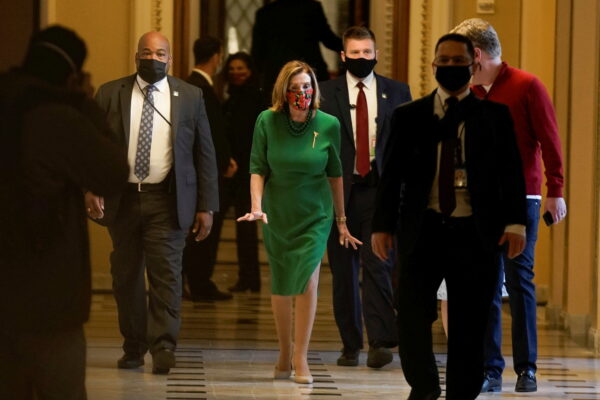 House Speaker Nancy Pelosi (D-Calif.) walks back to her office on Capitol Hill in Washington on Dec. 21, 2020. (Ken Cedeno/Reuters)

House Minority Leader Kevin McCarthy (R-Calif.) on Wednesday evening told GOP members that they would file a counter unanimous consent request to revisit the foreign aid in the 2021 omnibus, and criticized Democrats for not revisiting that portion of the package.

House Democrats “have conveniently ignored the concerns expressed by the president, and shared by our constituents, that we ought to reexamine how our tax dollars are spent overseas while so many of our neighbors at home are struggling to make ends meet,” a letter by McCarthy said.

“Thus, Republicans will offer a unanimous consent request to revisit the state and foreign operations title of the omnibus so that we can fully address the concerns at hand. It will be up to Speaker Pelosi to decide if she wants to act on behalf of the American people,” McCarthy wrote.

House rules authorize leaders of either party to object to unanimous consent requests on the floor, but they allow the bill to be voted on by roll call.

Meanwhile, Pelosi called on the president to convince Republican members not to obstruct the increased direct payment measure.

Pelosi said that Democrats have been pushing for larger direct payments to families, but “House and Senate Republicans have repeatedly rejected—first, during our negotiations when they said that they would not go above $600 and now, with this act of callousness on the floor.”

She said she hoped that by Monday the president “will have already signed the bipartisan and bicameral legislation to keep the government open and to deliver coronavirus relief.”

Along with the vote on the direct payments, the House will also vote to override Trump’s veto of the National Defense Authorization Act (NDAA).

The president vetoed the $740 billion act on Wednesday.

“Unfortunately, the act fails to include critical national security measures, includes provisions that fail to respect our veterans and our military’s history, and contradicts efforts by my administration to put America first in our national security and foreign policy actions,” Trump said in a Dec. 23 statement. “It is a ‘gift’ to China and Russia,” he added.