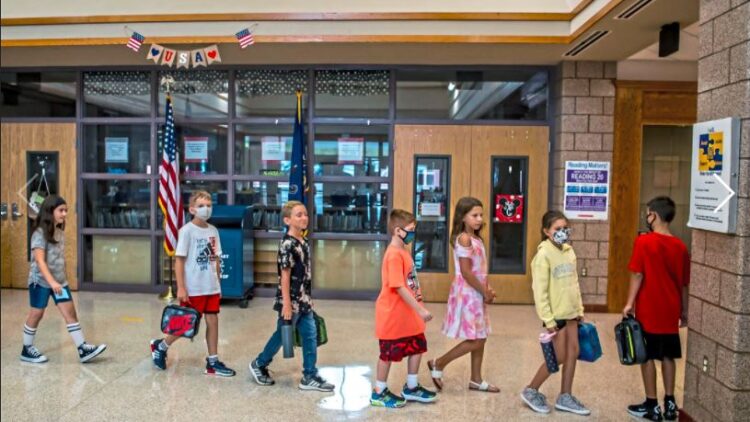 A class of students in Mars, Pennsylvania on their first day of school. (Alexandra Wimely)

A Pennsylvania Commonwealth Court threw out an order that required individuals to wear masks inside public and private schools Monday, saying that state health officials lacked the authority to implement such a rule, The Pittsburgh Post-Gazette reported. Judges on the court sided 4-1 with the ranking Republican in the state Senate and others who sued to challenge the mandate, which started in early September.

The state’s Disease Control Law does not give health secretaries “the blanket authority to create new rules and regulations out of whole cloth, provided they are related in some way to the control of disease or can otherwise be characterized as disease control measures,” wrote Judge Christine Fizzano Cannon, a Republican, for the majority.

Democratic Governor Tom Wolf on Monday announced he would grant full authority on whether or not to force masks on students to local school districts in January.

The Governor’s office issued a statement Wednesday saying that the court decision will be appealed by the state agency.

“The Department of Health has directed counsel to file an appeal today,” the governor’s office said. “Filing of the appeal will immediately stay the Commonwealth Court’s decision.”

“We are grateful the Commonwealth Court made the right decision by empowering parents to be part of health and safety decisions for their kids,” the statement said. “The law is clear in this case. The acting secretary of health does not have the authority to create new rules and regulations out of thin air.”

The Pennsylvania State Education Association said that despite the court’s ruling it is their belief that the muzzling of children in school should continue, citing “expert” knowledge that insists masking kids is only to their benefit and can do no harm.

“PSEA encourages elected and school district officials to continue to follow the advice of medical experts to keep our students, staff and their families as safe as possible at school,” union spokesman Chris Lilienthal said. “That should include continuing to mask up at school for the time being.”