Pennsylvania Election Fraud Protester: ‘We Need to Stop Being Afraid’

HARRISBURG, Pa.—Lori Blend was at home and frustrated with the entire election, from the countless irregularities to the declaration of victory before votes have even been counted. Increasingly, she felt it was time to take action.

“Unless we get out of our homes and we put boots on the ground and stand up for what we believe in, they’re going to run over us. We need to stand together,” Blend said at a Stop the Steal rally in Harrisburg, Pennsylvania on Nov. 21, 2020.

“Because we need to stand up, because I’m not happy with what’s going on with the election, the fraud, this was taken from us. Our vote matters, every vote that’s legal matters, the Democrats, I feel like they set this election up to have fraud be readily available to people with the mail in ballots,” Blend said.

“Our Constitution states that we have the right to life, liberty, and the pursuit of happiness, we have freedoms given to us,” she said. “And they’re trying to take that away, and we have to stand up and say we’re not OK with that, that we’re not going to accept that.”

“We need to gather together,” she said. “Get some people together. We need to stop being afraid. The threats of violence have people staying in their homes. We need to be out here and we need say exactly how we feel and we need to let these bureaucrats know we’re not just going to sit in our homes and idly let this happen. We need to make noise, in a good way.” 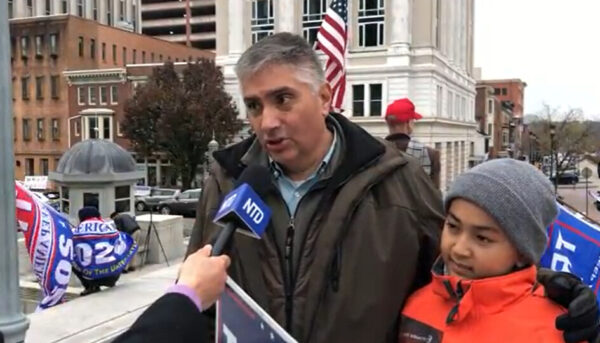 Johann Schuster says there has been plenty of evidence indicating the election has rigged, and the repercussions of the election being stolen are far and wide, and would put America on the path to socialism.

“I think communism did not stop when the USSR fell … we are the last way to stop communism of the world. We are Americans, we have to fight,” he said.

Schuster said as a nurse who was required to join a union California, he has some idea what the beginning of socialism would look like, and is against such policies.

Schuster added that mass media has lost the trust of people all around him. “We know that they are part of the problem,” he said. “They don’t realize they are useful idiots.” 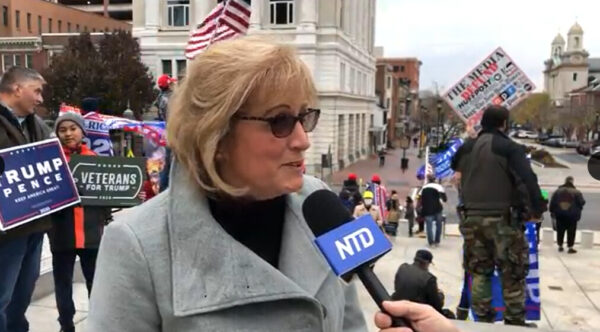 Abby Abildness has been leading a march around the capitol every day at noon.

“I think it’s been rigged. I think God’s going to turn it around. And I actually am very happy to see a lot of Asians here today, because I know you know what it’s like to be under communism and you know and are warning you would not want that for this nation, so I’m really glad to see everybody out here today,” she said.

21 Nov 2020
Election Fraud
Pennsylvania
Pennsylvania Voter: ‘We Are Seeing a Battle Between Good and Evil’
“Miscarriage of Justice” – Mark Levin Goes Off on Obama Judge That Dismissed Trump Campaign Lawsuit Seeking to Block Pennsylvania From Certifying Its Results