The Dixie Fire, currently burning across hundreds of thousands of acres in Northern California, is now the second-largest in the history of the state, burning a staggering 463,477 acres as of Sunday afternoon.

The Dixie Fire on Sunday became the second largest wildfire in state history after gobbling another 15,000 acres to sprawl across 463,477 total acres in four Northern California counties, Cal Fire said. Containment of the blaze Sunday remained unchanged at 21%.

Ongoing damage assessment finds the massive fire burning across Plumas, Butte, Tehama and Lassen counties has destroyed 404 structures including the historic Gold Rush town of Greenville, and damaged 27 others. More than 5,000 firefighters were battling the blaze.

Wildfires are a natural occurrence in California. However, an ongoing drought has left forests dry and vulnerable to burning. In addition, the accumulation of fuel in forests, which is partly the result of restrictions on logging, and the state’s failure to clear brush, is a factor.

In this photo combination, a before and after series shows a vehicle exploding into flames (above) on July 24, 2021 and after it burned on August 7, 2021 during the Dixie fire in the Indian Falls neighborhood of unincorporated Plumas County. – The monstrous Dixie Fire in northern California has grown to become the second-largest wildfire in state history, authorities, with three people reported missing and thousands fleeing the advancing flames. As of Sunday, the fire had destroyed 463,477 acres (187,562 hectares), up from the previous day’s 447,723 acres. It now covers an area larger than Los Angeles. (Photo by JOSH EDELSON / AFP) (Photo by JOSH EDELSON/AFP via Getty Images) 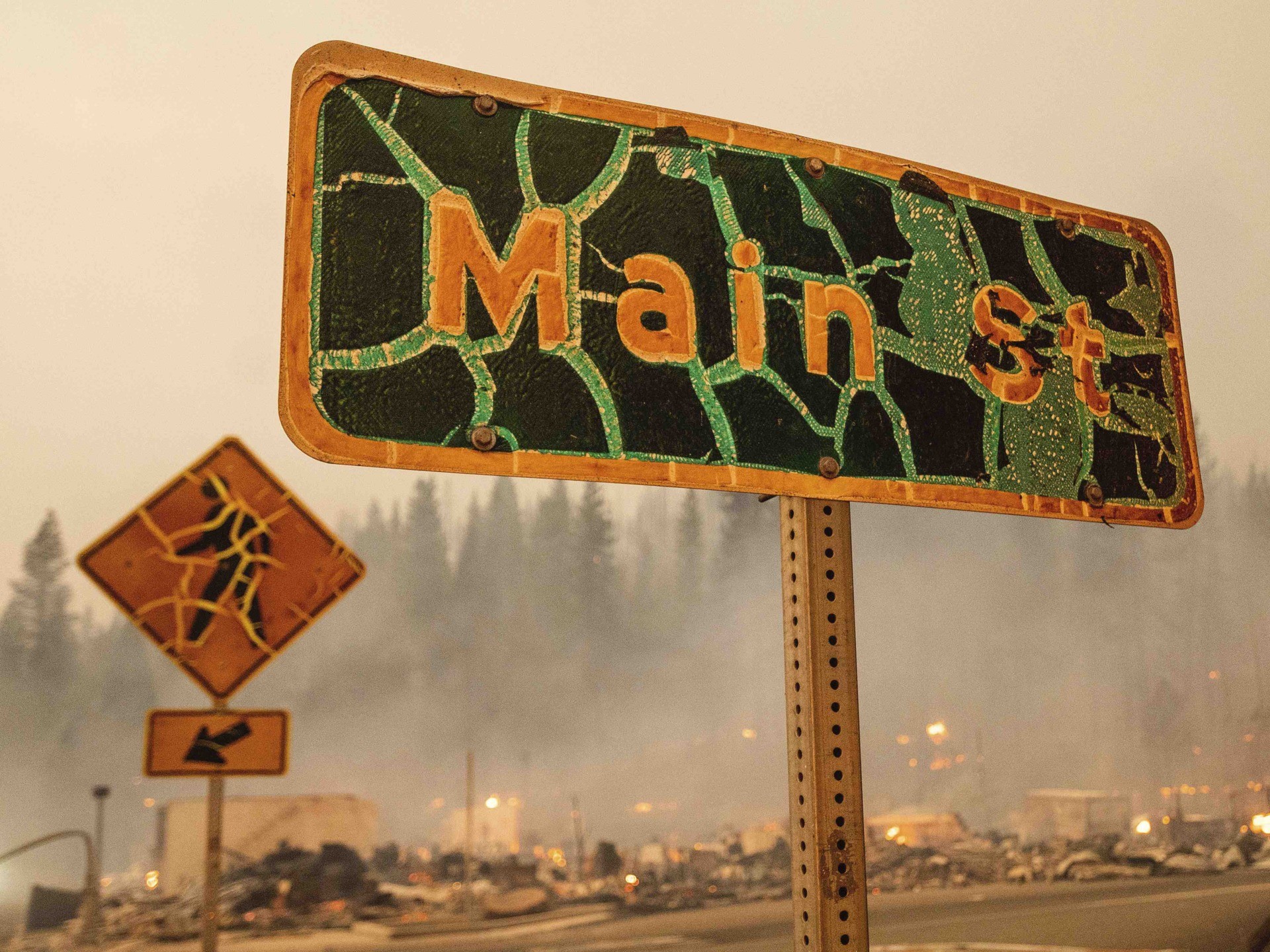 A street sign stands in central Greenville as the Dixie Fire tears through Plumas County, Calif., on Wednesday, Aug. 4, 2021. The fire leveled multiple historic buildings and dozens of homes in the community. (AP Photo/Noah Berger) 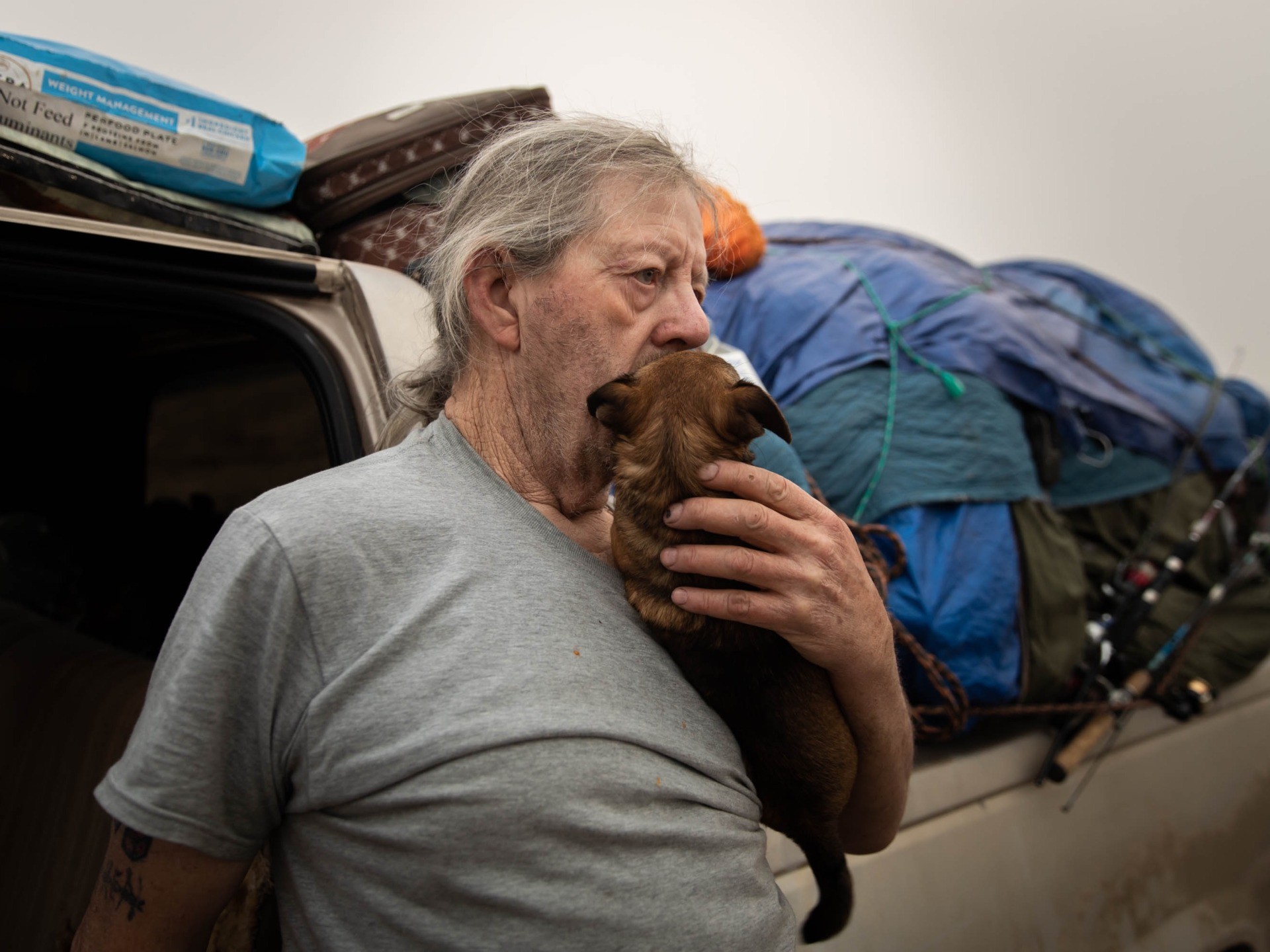 SUMMERVILLE, CA – AUGUST 07: Ted Engvall holds his dog and leans against a packed vehicle an evacuation center on August 7, 2021 in Summerville, California. According to reports, the Dixie Fire remains only 21% contained and has grown to 447, 723 acres making it the largest wildfire in the United States. (Photo by Maranie R. Staab/Getty Images)

Democrats and environmentalists have often blamed climate change for wildfires. However, scientists say that while a warmer and drier climate may make such fires more common in the future, other human factors are more significant immediate causes of wildfires in the present day. 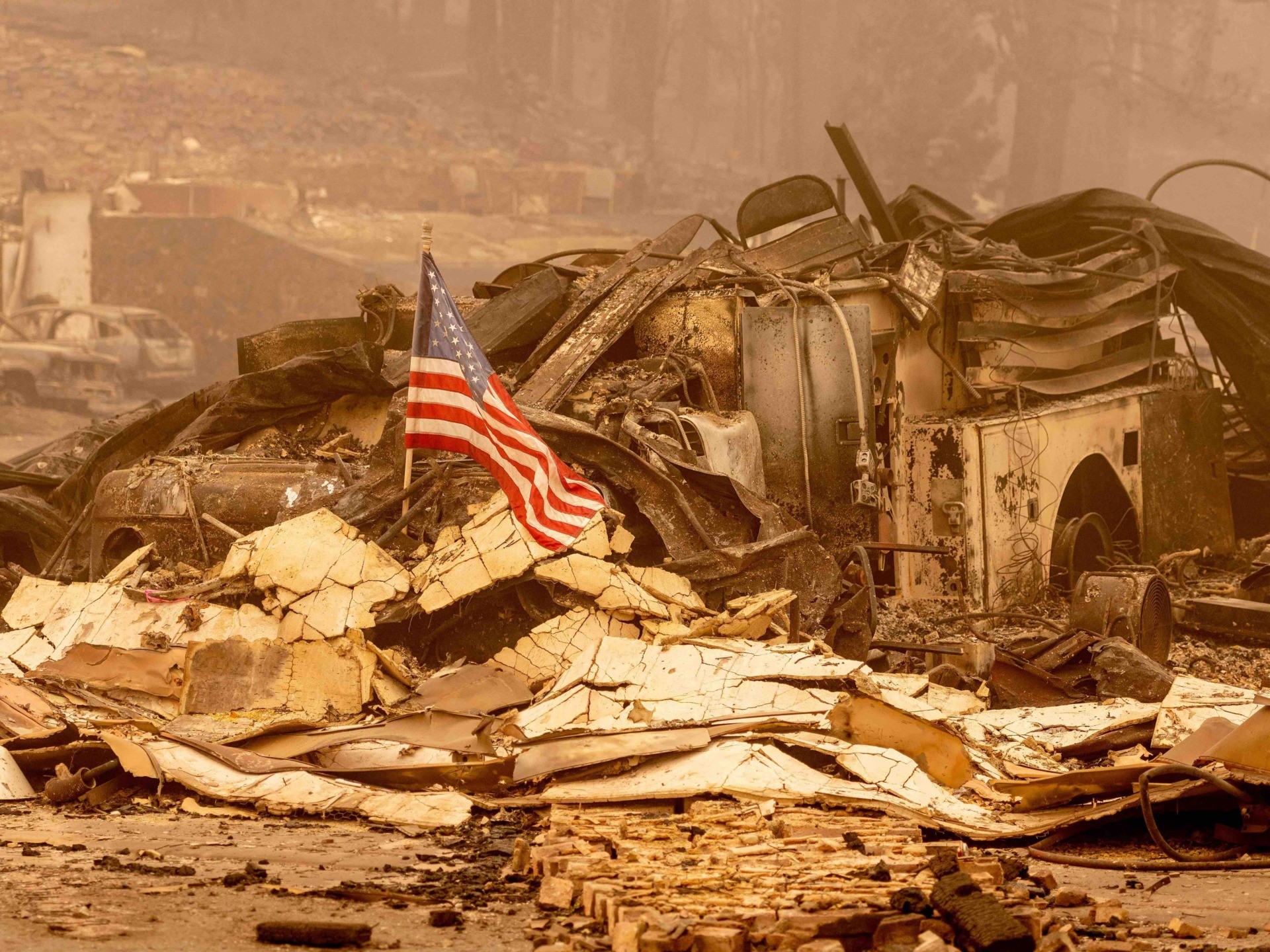 An American flag is placed on a burned fire engine at a burned fire station in downtown Greenville, California on August 7, 2021. – The Dixie Fire has now ravaged 446,723 acres in four counties, up from the previous day’s 434,813. That area is larger than Los Angeles — and has surpassed the sweep of the vast Bootleg Fire in southern Oregon. (Photo by JOSH EDELSON / AFP) (Photo by JOSH EDELSON/AFP via Getty Images) 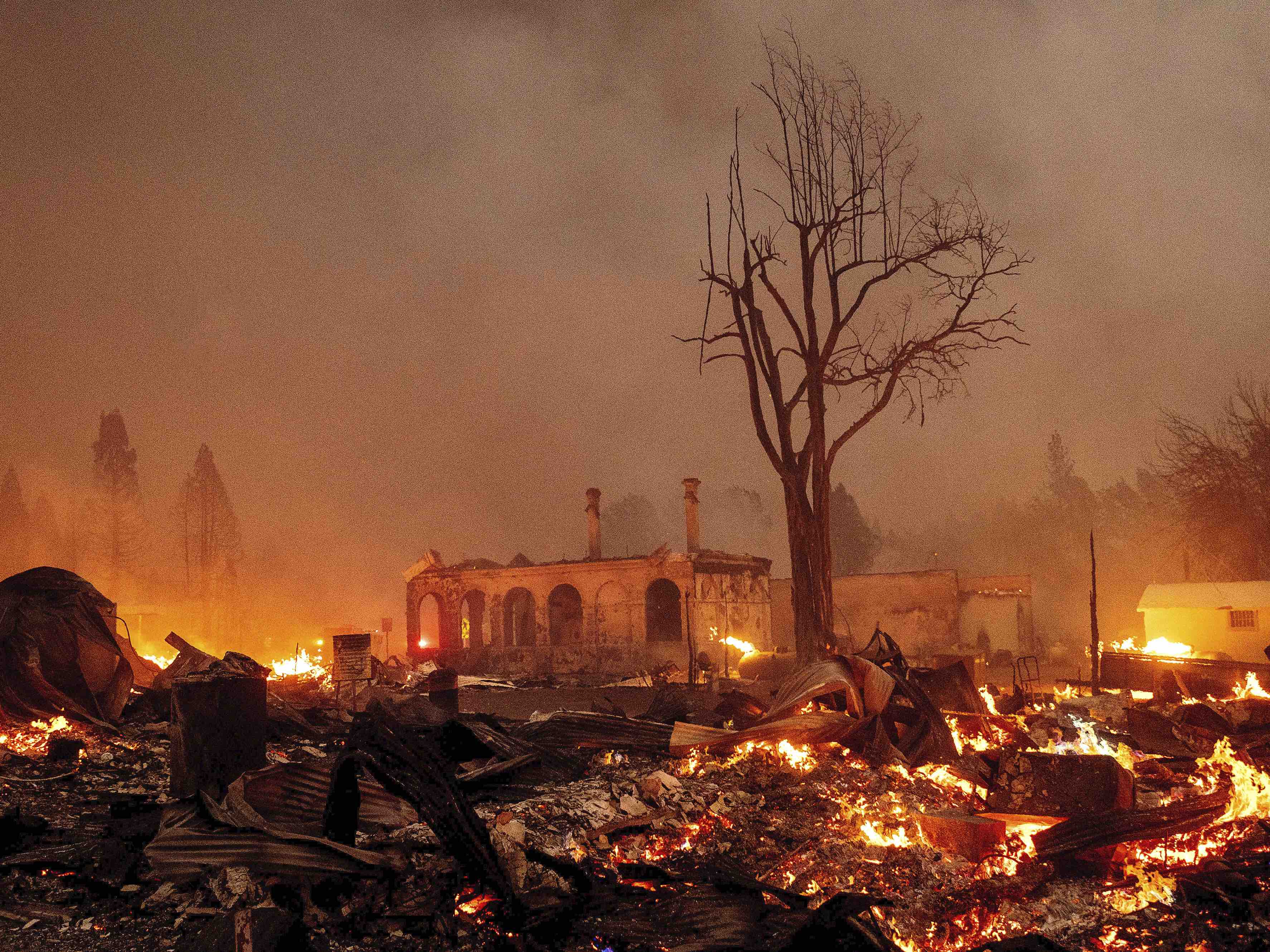 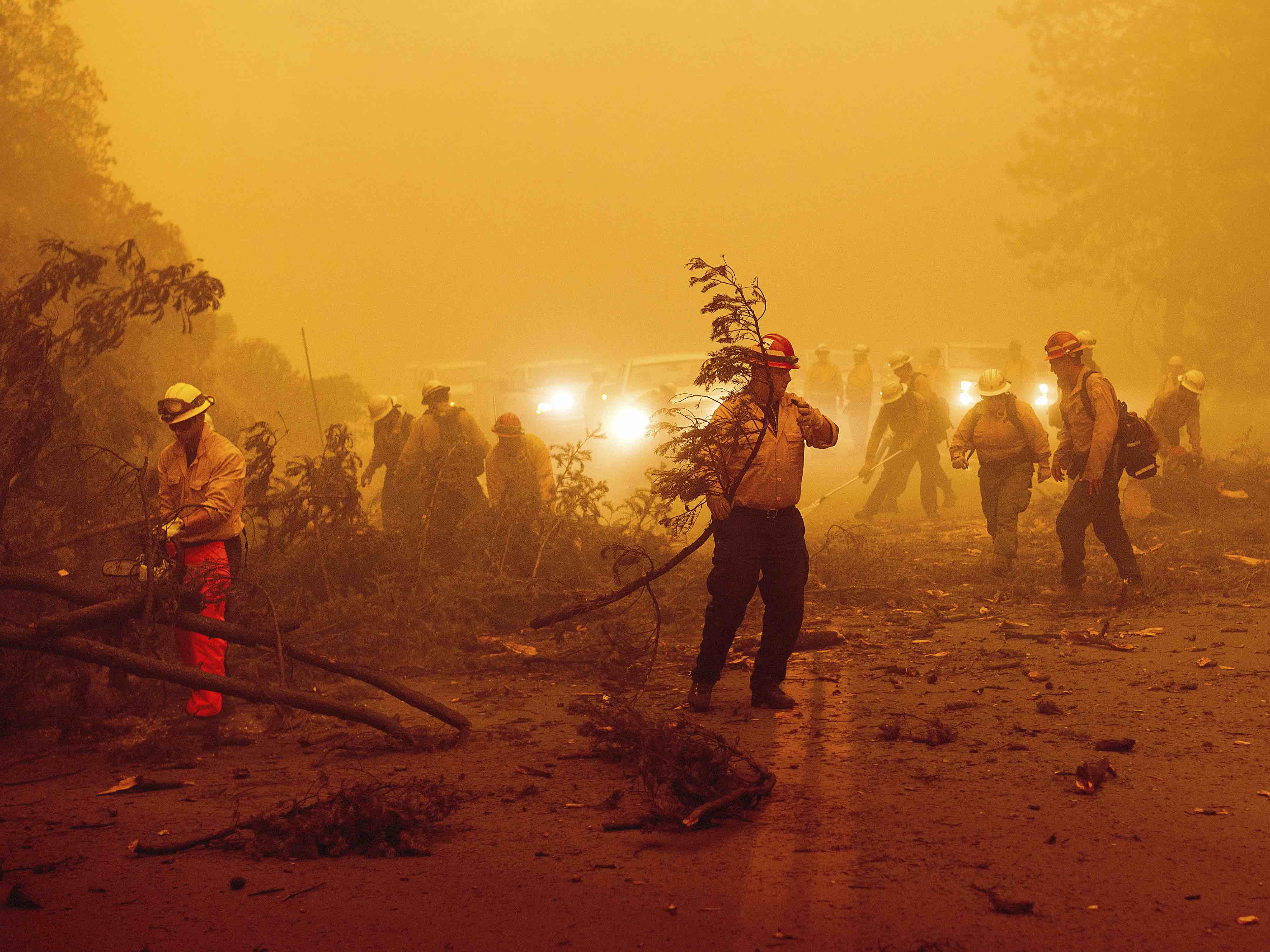 In the present case, a faulty power line belonging to the Pacific Gas & Electric Company is suspected as a potential cause of the blaze.

Gov. Gavin Newsom (D), currently facing a recall election Sep. 14, has been faulted for failing to keep his promises on clearing fuel from forests, with Capitol Public Radio reporting earlier this year that he had overstated his progress by some 690%.