The vote was on an amendment to President Joe Biden’s $1.9 trillion COVID-19 relief package.

Senators initially voted on the minimum wage amendment at 11:03 a.m., with every lawmaker voting in about an hour.

But the vote wasn’t closed, because Democrat leaders were trying to negotiate with Sen. Joe Manchin (D-W.Va.) over a proposed amendment to unemployment aid.

“I think they’re trying to wear down Joe Manchin, who is intent on making sure we don’t spend more than we have to,” Sen. Mitt Romney (R-Utah) told reporters on Capitol Hill.

“I tried to find a path that both sides might be able to go forward with,” Sen. Ron Wyden (D-Ore.), who authored an amendment on unemployment assistance, told reporters. “The moderates have said $300 [a week],” he added.

“Good negotiations. Should be good,” Manchin added during a break in negations around 6:30 p.m.

Thune said about 90 minutes later that the record for the longest vote in the history of the Senate was broken.

According to the Senate historian’s office, the previous record in modern history was a vote on an amendment on June 28, 2019.

That vote was prolonged to let Democrat senators who were in Florida for presidential primary debates fly to Washington and vote. It ultimately failed to pass after 10 hours and eight minutes.

That makes it the longest vote in modern Senate history. 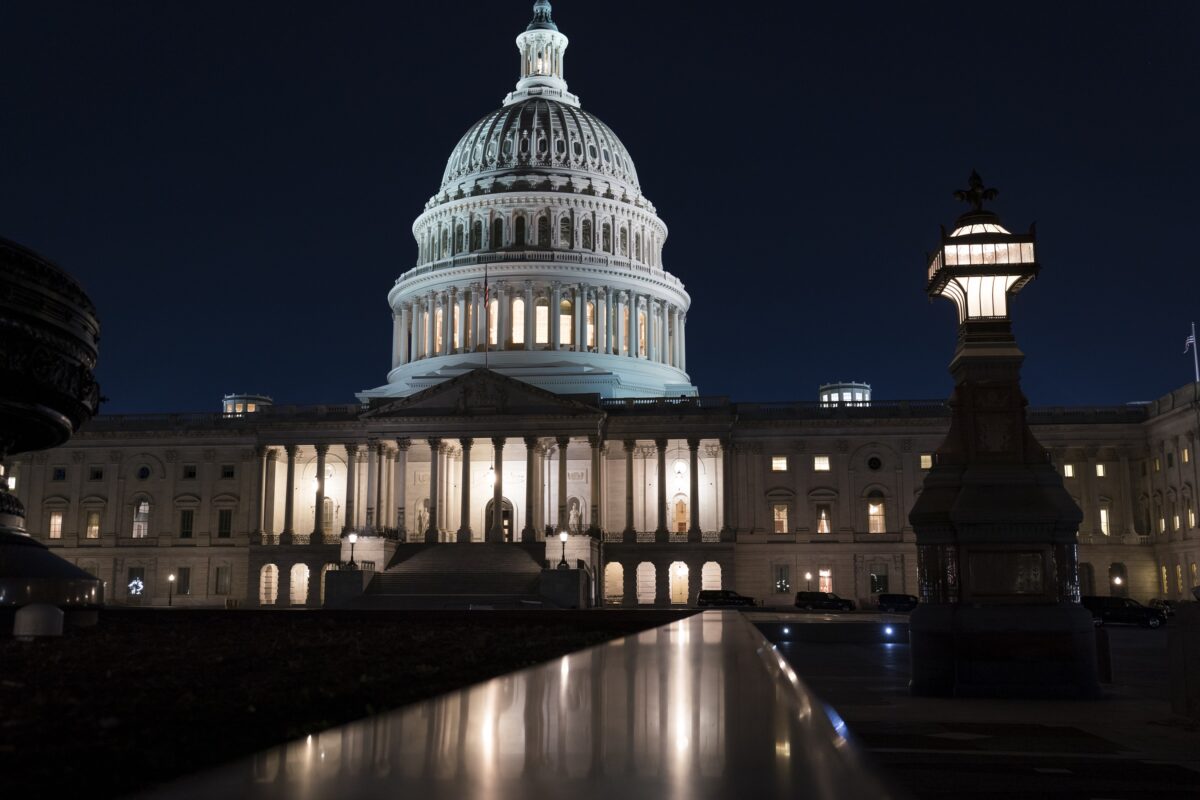 The Capitol is seen at dusk as work in the Senate is stalled on the Democrats’ $1.9 trillion COVID-19 relief bill, in Washington on March 5, 2021. (J. Scott Applewhite/AP Photo)

Manchin agreed to the unemployment provision after speaking with Senate Majority Leader Chuck Schumer (D-N.Y.) and Biden, among others.  Wyden said he spoke with Manchin in “long conversations” throughout the day.

About an hour later, Manchin joined Republicans in approving an unemployment aid amendment.

But he joined fellow Democrats in approving the final Wyden amendment at 1:04 a.m. The vote was 50–49, because one Republican senator had flown from Washington.

The Wyden amendment superseded the earlier one.

The agreement extends $300 a week in supplemental unemployment aid through Sept. 6. It also makes $10,200 of aid non-taxable, if the household receiving it doesn’t make more than $150,000.

“We have reached a compromise that enables the economy to rebound quickly while also protecting those receiving unemployment benefits from being hit with unexpected tax bill next year,” Manchin said in a statement.

The House version of the bill included $400 a week in supplemental aid, through the end of August.

“This is the longest extension of benefits that was possible tonight. … This is not everything I would have written,” Wyden told reporters late Friday. “This is the best that can be done for people hurting now.”

Senate Minority Leader Mitch McConnell (R-Ky.) said on the Senate floor after the agreement was reached that the situation proves “there are benefits to bipartisanship when you’re dealing with an issue of this magnitude.”

“Exactly one year ago instead of partisan scrambling, we were humming with bipartisan work, working on it together,” he said, referring to the first relief package Congress passed.

The White House said the relief package remains “incredibly progressive” even after compromises.

Senators continued offering amendments as the hours on Saturday went by, after Democrats rejected an attempt by McConnell to adjourn. Democrats are using a budget procedure to ram through the relief package with no or few Republican votes expected.