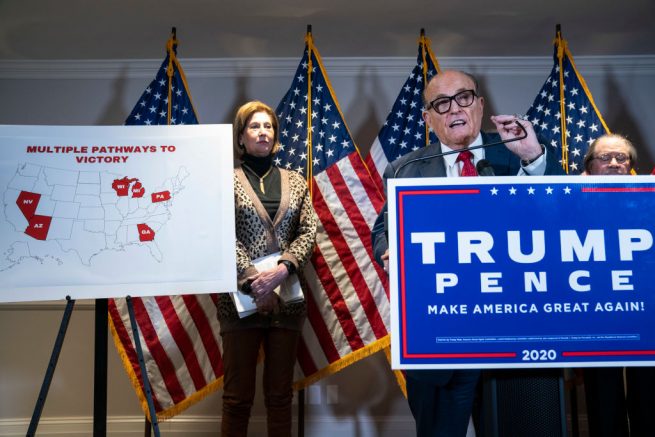 Rudy Giuliani speaks to the press about various lawsuits related
to the 2020 election, inside the Republican National Committee
headquarters on November 19, 2020 in Washington, DC. (Photo by Drew
Angerer/Getty Images)

The Trump campaign condemned election officials in Wisconsin for
continuously failing to follow the law.

In a
statement Friday, the campaign said â€œour democracy depends on
fair and impartial elections that adhere to the Constitution and
state statute.â€

Trump campaign statement on
the recount in Wisconsin pic.twitter.com/QJmQYcNaqe

The statement also noted Wisconsinâ€™s last-minute attempt to
change the rules was unlawful.

.@KayleighMcEnany
on Wisconsin recount: The
#Wisconsin election board is trying to change the recount laws
because they see how strong our recount petition is pic.twitter.com/ji2WiJTDqv

This came as recount procedures in the state got underway
Friday, following a petition to do so from the President. The Trump
campaign added when all of the legal votes are counted, President
Trump will be proven the winner.