Raphael Warnock, one of the two Democrats hoping to flip the Senate in the twin runoff in Georgia, side-stepped an invitation to renounce Marxism and socialism, posed during yesterday’s hour-long debate.

During the debate on Dec. 6, they were both allowed to ask one question of each other.

Warnock asked Loeffler if she accepted that President Donald Trump had lost the election. She side-stepped the question and said she supported the president’s legal challenges.

For her question, Loeffler asked Warnock if he would renounce socialism.

“In your writings and your teachings, you’ve repeatedly praised Marxism and the redistribution of income,” said Loeffler. “Can you here and now, for all Georgians, renounce socialism and Marxism?”

Warnock did not directly answer. He responded by saying, “I believe in our free enterprise system.”

Warnock, who is pastor of the Ebenezer Baptist Church in Atlanta, went on to say that his father was a small business owner and that during the recession, he had led his church to build a community center.

“Among other things, we had a financial literacy center that taught people how to repair their credit, create a 700 credit score community, how to create a business how to buy a home, how to participate in our free enterprise system,” he said, using the topic to pivot to an attack on Loeffler’s business doings. 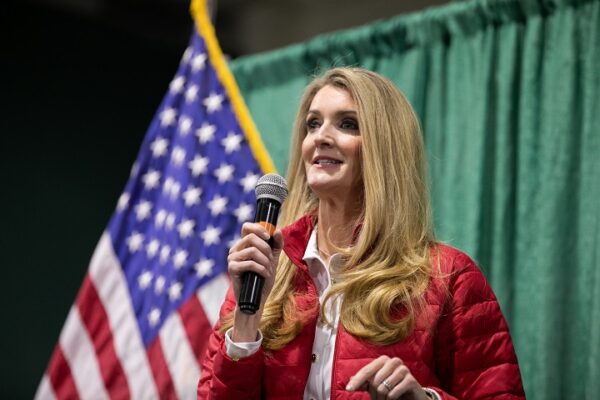 Sen. Kelly Loeffler (R-Ga.) speaks to a crowd of supporters during a “Defend the Majority” rally at the Georgia National Fairgrounds and Agriculture Center in Perry, Ga., on Nov. 19, 2020. (Jessica McGowan/Getty Images)

Loeffler repeatedly referred to Warnock as a “radical liberal” through the course of the debate, painting the race as the choice between the American dream and socialism.

Warnock tried to paint Loeffler as a rich privileged businesswoman who had bought her Senate seat and said that voting for him was about health care and justice reform.

Both candidates claim to be political outsiders from humble beginnings. Loeffler, a businesswoman, was appointed to her seat in the Senate just last year after Sen. Johnny Isakson, a Republican, retired early in late 2019.

Twice asked about potential reforms to the Supreme Court, Warnock did not address the question and pivoted to other issues.

“I’m really not focused on it,” said Warnock when asked directly if he supported expanding the Supreme Court, before shifting to talk about healthcare.

Several questions were raised about the presidential election and election security.

Loeffler side-stepped direct questions about whether she supported Trump’s claims of winning the election, but said that it “very clear that there were issues in this election,” noting that she had called for investigations into voter fraud in Georgia, and repeatedly highlighting ongoing investigations in the state.

“President Trump has every right to every legal recourse,” she said. “But we also have to make sure that Georgians know that we have a process that works that their vote is counted and that no illegal votes are counted. And that’s what I’m going to continue to fight for to make sure that Georgians know, everything is at stake in this election, the future of our country.”

Loeffler said that Warnock wanted to defund the police. Warnock denied that this was the aim of his agenda of “reimagining the relationship between police departments and the communities.” 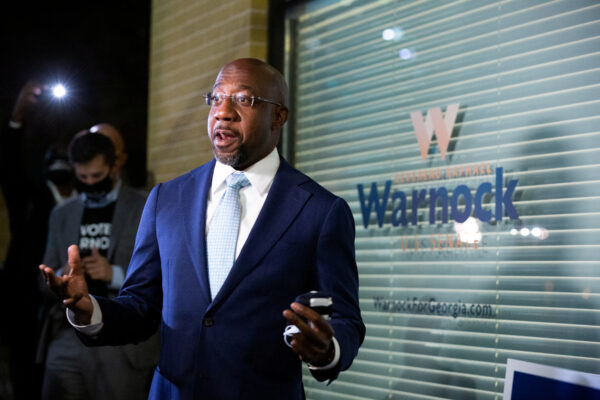 Warnock repeatedly sought to characterize Loeffler as part of the privileged rich elite.

At one point Loeffler pushed back, saying, “I was born and raised on a farm. I grew up working in the fields. I waitressed my way through school, and I was the first in my family to graduate from college.”

The two also presented dueling interpretations of their own, and each other’s Christian beliefs.

Warnock cited the bible’s teachings on the evils of worshipping money.

In turn, Loeffler accused Warnock of “attacking” the military from his pulpit—something which Warnock denies.

The race between Loeffler and Warnock is one of two on Jan. 5 that will decide the fate of the United States Senate.

In the other race, Sen. David Perdue (R-Ga.) is facing challenger Jon Ossoff, a filmmaker.

At the current election count, Republicans hold a 50–48 lead over Democrats in the Senate. If both of the Georgia seats turn blue for the Democrats, the ensuing 50–50 tie means the vice-president gets a tiebreaker vote—tying the fate of the Senate to the final outcome of the presidential election process.

This article has been updated to include further details of Warnock’s role in his church.