President Joe Biden is having a hard time escaping the glaring lies he repeated during his 2020 campaign about Kyle Rittenhouse, who is currently standing trial for murder.

The trial has been a massive fiasco for the prosecution even as the establishment media carries water for the increasingly weak claims that Rittenhouse acted maliciously when he shot three people, killing two, amid the violent riots in Kenosha, Wisconsin, last year.

So far, the state’s own witness has revealed that one of the men Rittenhouse shot had tried to grab his gun, and Gaige Grosskreutz, another of Rittenhouse’s “victims,” has admitted that Rittenhouse, who was 17 at the time, fired on him only after he pointed a loaded handgun at the teen.

One of the more painful moments of the trial came when Rittenhouse himself took the stand and broke down while describing the moments leading up to the shooting. As video evidence clearly shows, rioters chased him down before he was ultimately forced to fire in self-defense.

So Biden probably shouldn’t have counted his eggs before they hatched last year as he leveraged Rittenhouse to beef up the narrative that then-President Donald Trump was sympathetic to white supremacists. Now that he’s in office, the lies about both Rittenhouse and Trump are coming back to bite him.

In August 2020, just days after the Rittenhouse shooting, Biden was asked by CNN’s Anderson Cooper why he thought Trump hadn’t yet spoken publicly about the police shooting of Jacob Blake, which sparked the riots in the first place.

Biden responded by suggesting that Rittenhouse was part of a “militia” and that Trump was unwilling to denounce white supremacists.

“Look, I don’t know enough to know whether that 17-year-old kid — exactly what he did. But allegedly he’s part of a militia coming out of the state of Illinois,” Biden said.

Do you think Kyle Rittenhouse is innocent?

It really is astounding that Biden so confidently repeated this already exhaustively debunked lie.

Trump decidedly and in no uncertain terms condemned white supremacy after the riot, as a matter of fact.

“We condemn in the strongest possible terms this egregious display of hatred, bigotry and violence. It has no place in America,” he said in August 2017.

“Racism is evil, and those who cause violence in its name are criminals and thugs, including the KKK, neo-Nazis, white supremacists and other hate groups that are repugnant to everything we hold dear as Americans.”

Thanks to a FOIA Request, the CDC Just Made the Biggest Admission About COVID Yet

If this wasn’t clear enough, Trump immediately followed up his “very fine people” comment by saying, “I’m not talking about the neo-Nazis and the white nationalists, because they should be condemned totally.”

That’s right — even though leftists continue to claim to this day that Trump called white supremacists and neo-Nazis “very fine people,” he actually clarified who he was talking about in the same breath and denounced the radical factions present at the Charlottesville riot.

There are no two ways about it: Biden was lying. Trump had denounced white supremacy literally years before Biden campaigned on the insane claim that he hadn’t.

Our current president was not only willing to blatantly lie about Trump, but also to imply that Rittenhouse was probably a racist militia member, too.

Of course, Anderson Cooper, the brilliant and objective journalist that he is, did not push back on this wild suggestion. The media has for well over a year now spouted entirely fabricated claims about Rittenhouse — which is probably why Biden felt perfectly comfortable including the teen’s image in a campaign video about white supremacy.

There’s no other way to put it: the President of the United States refused to disavow white supremacists on the debate stage last night. pic.twitter.com/Q3VZTW1vUV

The Rittenhouse family has refused to take this bald-faced slander from the media and our now-president sitting down, as well they should not.

Rittenhouse’s mother also slammed Biden this week for using her son’s image in the campaign video, which recycled the same debunked line that Trump refused to disavow “white supremacists.”

“When I saw that, I was shocked, I was angry,” Wendy Rittenhouse told Fox on Thursday. “President Biden [doesn’t] know my son whatsoever, and he’s not a white supremacist. He’s not a racist. And [Biden] did that for the votes.”

“And I was so angry for a while at him and what he did to my son. He defamed him,” she said.

Who can blame her?

It’s bad enough that the media has so aggressively tried to taint this kid’s name in the court of public opinion. But for a presidential candidate to lump him in with vile racists is quite another matter.

That there’s someone in the White House who has so little regard for the basic principle of presumed innocence should seriously scare us. 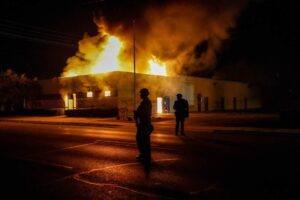 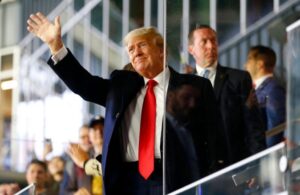