Critics are asking what Secretary of Transportation Pete Buttigieg is doing about the congestion of cargo ships at the ports of Los Angeles and Long Beach, as investigators point to a cargo ship’s anchor as a likely cause of a recent oil spill in the area.

As Breitbart News reported last month, there is a massive backup of cargo ships off the coast of Southern California, due to a variety of factors, including rising import demand, insufficient trucking, and workers’ reluctance to do night shifts.

On Friday, an undersea pipeline linked to an offshore oil platform leaked roughly 144,000 gallons of oil into the Pacific Ocean.

A person stands near oil washed up on Huntington State Beach after a 126,000-gallon oil spill from an offshore oil platform on October 3, 2021 in Huntington Beach, California. The spill forced the closure of the popular Great Pacific Airshow with authorities urging people to avoid beaches in the vicinity. (Photo by Mario Tama/Getty Images)

Federal investigators suggested an anchor might have been the cause, and on Tuesday, an expert suggested that the backlog of cargo ships might have brought ships to coastal waters where they were unfamiliar with undersea infrastructure. 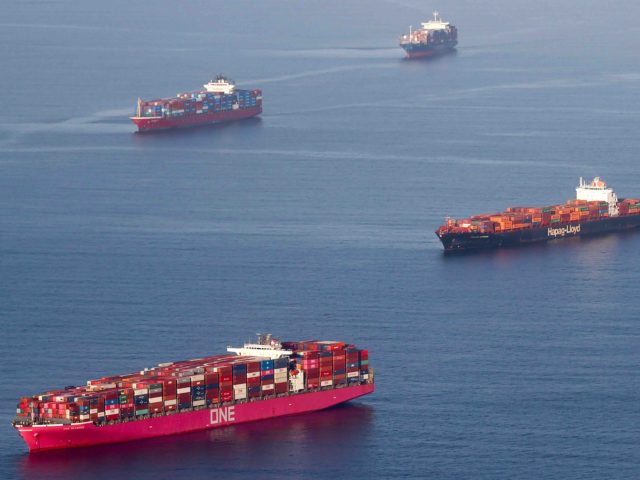 LOS ANGELES, CALIFORNIA – SEPTEMBER 20: In an aerial view, container ships are anchored by the ports of Long Beach and Los Angeles as they wait to offload on September 20, 2021 near Los Angeles, California. Amid a record-high demand for imported goods and a shortage of shipping containers and truckers, the twin ports are currently seeing unprecedented congestion. On September 17, there were a record total of 147 ships, 95 of which were container ships, in the twin ports, which move about 40 percent of all cargo containers entering the U.S. (Photo by Mario Tama/Getty Images)

The combination of oil production and global shipping in the same coastal area is now at the center of an investigation into the cause of a massive oil spill that sent crude onto Orange County beaches and sensitive wetland areas.

The U.S. Coast Guard is looking at the possibility that the crush of shipping traffic came into violent contact with this network of undersea infrastructure and triggered a spill that sent an estimated 144,000 gallons of oil into the ocean.

On Tuesday, diver reports and footage from remotely operated submarines showed that a 4,000-foot section of a nearly 18-mile oil pipeline had been displaced approximately 105 feet and had a 13-inch split along its length, according to the Joint Unified Command, which is overseeing the investigation.

The displacement, federal sources said, is best explained by a ship’s anchor dragging across the ocean floor and hooking into the pipeline. There were multiple large cargo vessels in the immediate area of the leak before the oil was spotted.

Buttigieg commented Wednesday about problems in the U.S. supply chain, but did not refer to the oil spill:

As our economy continues to recover and consumers purchase a record number of goods, the world is facing major supply chain disruptions. President Biden formed a Task Force in June that is hard at work engaging industry to address supply and demand mismatches. https://t.co/jfSMuKIDbz

In July, Buttigieg hosted a virtual roundtable discussion about the problems at the L.A. and Long Beach ports. However, int the months that followed, the problem has only become worse. Local and national commenters are asking where Buttigieg is now, and what he is doing to address a cargo crisis that has now caused serious environmental damage to the coastal areas.