All 72 Wisconsin counties have reported their presidential election results, showing Democrat Joe Biden’s lead over President Donald Trump is about 20,000, although the Trump campaign has until 5 p.m. local time on Wednesday to request a recount, officials said.

The final canvasses showed Biden winning by 20,608 votes, according to the results provided by the Wisconsin Elections Commission. Trump’s campaign will have to pay for a recount, which reportedly costs about $8 million.

The Trump campaign also has the ability to request a recount in individual counties to lower the cost.

“The legal team continues to examine the issues with irregularities in Wisconsin and are leaving all legal options open, including a recount and an audit,” said Trump campaign legal adviser Jenna Ellis in a statement to news outlets on Tuesday after the canvassing was completed.

It’s not clear if the campaign will request a recount.

Milwaukee County Clerk George Christenson told CBS58 that the cost of a recount is much higher in 2020 due to the CCP (Chinese Communist Party) virus pandemic.

THIS SAYS IT ALL! https://t.co/zZSspsJPe9

“We’re operating in a whole new environment right now, which really has driven the cost up substantially,” he remarked. “We looked at several spaces ranging from 60,000 square feet up to this [the Wisconsin Center], and we just felt for the public’s safety, we wanted to go with the largest space we could get,” Christenson said, referring to the logistical issues and costs related to Election Day and vote tabulation.

A lawsuit filed last week from three voters in Wisconsin alleged that voters in the three counties may have bypassed state law requiring voters to provide a photo ID by declaring themselves “indefinitely confined” due to the virus. The suit also takes issue with clerks’ abilities to take corrective actions to remedy errors related to witnesses’ addresses on absentee ballots. 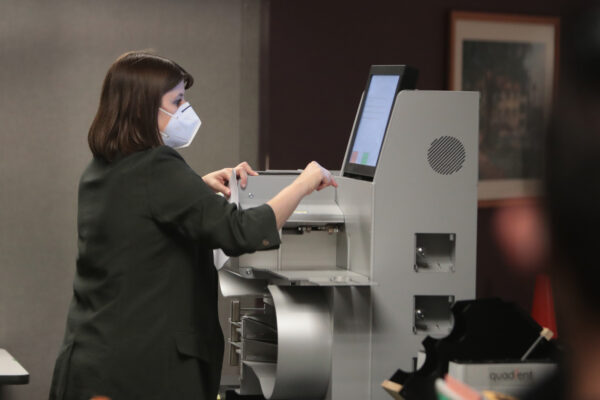 An election official collects the count from absentee ballots from a voting machine in Milwaukee, Wis., on Nov. 4, 2020. (Scott Olson/Getty Images)

“Election workers, overwhelmed by the sudden flood of mailed ballots, have less ability to carefully review them to screen out fraudulent ones, creating a substantial risk that fraudulent votes will be counted and vote-dilution disenfranchisement will occur,” the lawsuit says.

However, that suit was dismissed earlier in the week after the plaintiffs requested it on Nov. 16. U.S. District Judge William Griesbach, a nominee of former President George W. Bush, granted their request.

Trump’s campaign has alleged that there were instances of fraud and irregularities in Wisconsin.

“There have been reports of irregularities in several Wisconsin counties which raise serious doubts about the validity of the results,” Bill Stepien, Trump’s campaign manager, said in a statement earlier in the month.

‘These Are Not Your Children’: Wisconsin Parents Tell Joe Biden To Stuff Masking Their Children Where The Sun Don’t Shine