The average price of a regular gallon of gasoline in California reached a record high on Monday as sticker shock continues to anger drivers paying more at the pump.

Monday’s average price for a gallon of regular unleaded gas in California rose to $4.682, according to the American Automobile Association. The price broke the previous record of $4.671 set in October 2012.

The jump is most noticeable when compared with gasoline prices one year ago. In California, the average price at the same time in 2020 was just $2.125 per gallon for regular unleaded fuel.

The prices also make California, the most populated state in the nation, the state with the highest average gas prices in the nation, according to the data.

The Automobile Club of Southern California noted the price increases come as millions of people across the state prepare to travel for the Thanksgiving holiday.

“The Auto Club is projecting 4.4 million travelers for the Thanksgiving holiday, with 3.8 million of them driving to their holiday destinations,” Auto Club spokesman Jeffrey Spring said.

“Our view is that the rise in gas prices over the long term makes it an even stronger case for doubling down our investment and our focus on clean energy options so that we are not relying on the fluctuations and OPEC and their willingness to put more supply and meet the demands in the market.  That’s our view,” Psaki said.

“We’ve asked the FTC to look into the need for OPEC to release more—that are the larger issues here and that’s why we’ve been focused on those options,” she added.

While some have suggested supply chain issues or other problems are to blame, Sen. Tom Cotton (R-Ark.) believes the Biden administration is intentionally working to increase gas prices.

“Most notably, more and more people tell me that they’re not even able to fill their pickup truck tank up for the entire week,” Cotton told Breitbart.

“They’ve got to fill up half a tank and hope that the price comes down by the end of the week. That, in particular, is the intended effect of Joe Biden’s energy policy. It’s not unintended or some accident. They want gas to cost $4 a gallon because they want all of us to get out of pickup trucks and SUVs and get into small electric compacts or bicycles or scooters or whatever else Pete Buttigieg takes to work,” he added. 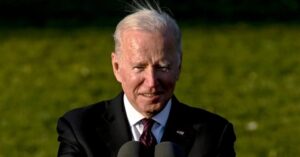 Poll: Only 39% of State Voters in Battleground Districts Support Build Back Better Agenda
NYC Teacher Says School Allows BLM T-Shirts but Banned Him from Wearing This