The chairman of the Democratic Congressional Campaign Committee, tasked with maintaining his party’s control over the House, took aim at one of the most vulnerable Democratic incumbents for criticizing President Joe Biden and his increasingly unpopular political agenda.

In a Tuesday New York Times interview, Rep. Sean Patrick Maloney (N.Y.) rebuked fellow House Democrat Abigail Spanberger after the Virginia congresswoman criticized Biden’s agenda as overreaching and out of touch. Maloney maligned Spanberger’s comments—which included the assertion that “nobody elected [Biden] to be FDR”—as “out of date.” He also defended Biden, whose approval rating is in rapid decline, by arguing that congressional Democrats have not done enough to sell the president’s policy proposals to the American people.

Maloney’s willingness to side with Biden over a vulnerable incumbent whom his organization has pledged to protect comes after Democrats suffered a shocking string of losses in Virginia, a state the president won by double digits in 2020. In Spanberger’s Seventh Congressional District, Republican governor-elect Glenn Youngkin bested Democratic opponent Terry McAuliffe by 15 points. Spanberger in 2020 won the district by 2 points, meaning that the result marked a 17-point swing.

Spanberger acknowledged Youngkin’s electoral success with her constituents during a Tuesday appearance on New York Times podcast The Daily, adding that due to the “nature of her district” she “will have a hard time getting reelected.” Spanberger also echoed her belief that voters elected Biden to “be normal and stop the chaos,” not to enact a sweeping policy agenda.

“I would say if you went out and asked any type of voter, ‘Did you vote for Joe Biden because you wanted (insert a policy priority),’ some really super engaged voters may say yes, but many will not,” Spanberger said.

Neither Spanberger nor the DCCC returned requests for comment.

Maloney in January became DCCC chairman after he pledged to “expand” Democrats’ razor-thin House majority in 2022. Since then, however, Maloney has repeatedly faced criticism from the party’s centrist wing, which largely consists of endangered members who represent swing districts.

Maloney’s DCCC staff in April green-lit $5,000 wire transfers from Rep. Alexandria Ocasio-Cortez (D., N.Y.) to a number of imperiled House Democrats, many of whom returned the money out of fear of being tied to the avowed socialist. Months later, several centrist House Democrats accused the DCCC of threatening to cut off financial support for their campaigns if they failed to vote for Biden’s multi-trillion-dollar social spending plan.

Some members of the DCCC’s “2022 Frontline Program”—which aims to “provide Democratic members of Congress from potentially competitive seats the resources to execute effective reelection campaigns”—have already bowed out of next year’s midterm elections. Rep. Ron Kind (Wis.), for example, announced in August that he would not run for reelection after the Washington Free Beacon revealed he rented office space to a Chinese masseuse linked to human trafficking and prostitution. 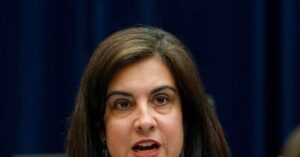 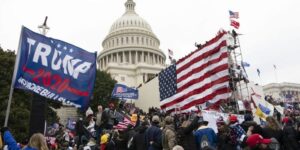