Arizona’s most populous county saw its board of supervisors vote on Friday to certify the results of the Nov. 3 general election, after weeks of vote counting and legal challenges that have all since been dismissed.

The Maricopa County Board of Supervisors—four Republicans and one Democrat—unanimously voted to approve the election results in the state, which shows Biden ahead by more than 45,000 votes. As of Friday, Biden is ahead of Trump in Arizona state by more than 10,000 votes. Trump won the state in 2016 by 3.5 percentage points.

“We’ve canvassed the general election results and can assure Maricopa County voters proper steps were taken to ensure a full and accurate count of all votes,” Maricopa County Board of Supervisors Chairman Clint Hickman said in a statement. “No matter how you voted, this election was administered with integrity, transparency, and in accordance with state laws.”

Hickman, a Republican, said there is no legal reason not to certify the results.

“In a free democracy elections result in some people’s candidates losing,” he said, “I was disappointed in the outcome of a couple races and I was extremely happy with the outcome in others. But I’m not going to violate the law or deviate from my own moral compass as some have pushed me to do.”

The certification went ahead while protesters outside the venue urged the members of the board not to certify the results. Around 70 Trump supporters gathered outside the site where the supervisors were meeting, with various speakers saying that any certification would be an act of “treason,” according to The Associated Press. Several people said an independent, forensic audit of ballots and voting machines would make them feel comfortable accepting whatever election outcome.

“The point is it’s not that there is voter fraud. The point is, is there the possibility of voter fraud?” Stephanie O’Brien, 56, told the news agency. “If there is, it takes away the confidence of the people. My biggest issue is I don’t feel confident about it.” 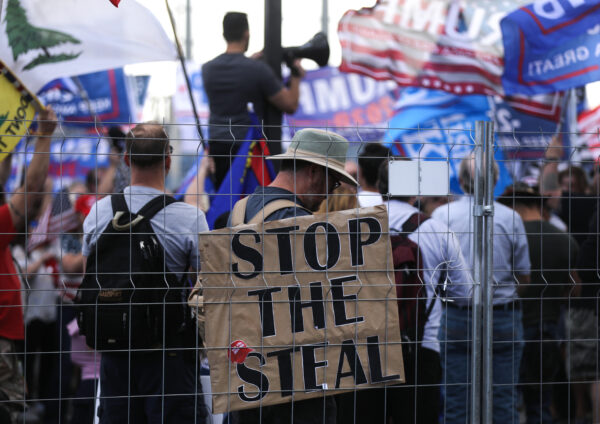 Supporters of President Donald Trump demonstrate at a ‘Stop the Steal’ rally in front of the Maricopa County Elections Department office in Phoenix, Ariz. on November 7, 2020. (Mario Tama/Getty Images)

The canvass in Maricopa County comes just one day after a state judge rejected (pdf) a lawsuit (pdf) brought by the Arizona Republican Party, which had sought a a new hand count audit of ballots in Maricopa County at the precinct level, citing questions over the vote counts. The GOP accused the county of having violated state law by not assigning voters polling places in their own precincts, as had been the traditional practice in prior elections. Voters were instead free to cast their ballots at any polling center in the county.

Arizona’s Secretary of State Katie Hobbs, a Democrat, praised the judge’s decision on Thursday and asserted on Twitter that the vote count was done “in accordance with Arizona law.”

But Chairwoman of the Arizona Republican Party Kelli Ward denounced the judge’s decision and said that Arizona voters should have “supreme confidence that only legal ballots were counted.”

“This election has been fraught with tension as voters were forced to adjust to new election procedures put in place because of COVID-19, as well as organized efforts by Democrats across the country, which helped lead to a wildly different voting process than in years past,” she alleged. “Because of this, I stand by my call for a full hand-count audit of our state’s election results.”

The Trump campaign earlier launched a lawsuit against Maricopa County over rejected votes because of alleged improper guidance provided by the poll workers. But a state judge dismissed the suit as moot on Nov. 13 after the campaign filed a motion (pdf) telling the court that the outcome of the suit would not impact the state’s presidential results. Trump attorney Kory Langhofer also wrote that a favorable ruling would still impact two down-ballot races.

On Friday, the third and final lawsuit in Maricopa County was dismissed. The suit alleged that the county wrongfully denied a voter the right to cast her ballot, and did not properly process another voter’s ballot. The suit revolved around use of a Sharpie felt-tip pen that voters said they were required to fill the ballots with.

A number of media outlets declared Democratic nominee Joe Biden as president-elect on Nov. 7; President Donald Trump has alleged voter fraud and said any declarations of victory are premature. His campaign has mounted legal challenges over a variety of alleged voting irregularities in battleground states.

The Epoch Times isn’t calling the race until the legal battles are resolved and all results are certified.